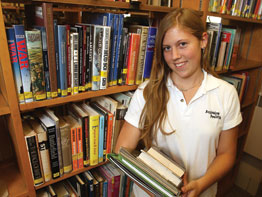 Daddy-daughter time has always been unique at the Hosford home in Annapolis.

Every evening since she was 8, Audrey has joined her father, Reid, to watch the television quiz show “Jeopardy!”

Those days of intellectual challenge will soon take on a new meaning.

Audrey, a junior at Archbishop Spalding High School in Severn and a goalie on the Pioneers’ ice hockey team, will be on the show’s Los Angeles stage for its “Teen Tournament” Oct. 7 after being selected this summer.

“My one regret,” Mr. Hosford said, “is that my mother is still not alive to see this because she is the one that got me into “Jeopardy!” way back when.”

As a longtime fan of the show, Audrey recognizes some of its most famous champions, like Ken Jennings. Recent repeats of his $3 million-plus run have Audrey’s adrenaline already pumping.

The thought of being on stage with host Alex Trebek after years of being a fan of the show, Audrey said, is “mind-blowing.”

With a rhetorical wonder, Audrey said, “You think about it and you say, ‘I’ve been watching this guy for how long?’ ”

The path to Jeopardy was laid through the foundation of her parents, Teri and Reid. Audrey had a voracious appetite for books as a young child. In third grade, she read tales of mythology. The fourth saw her devouring reads on Mary Queen of Scots, Cleopatra and Henry VIII. In fifth grade, she was completing Schindler’s List. She finished the full version of Homer’s The Odyssey during middle school

“I’ve just been very lucky with the teachers she’s had, and their willingness to keep her stimulated,” Mrs. Hosford said.

Audrey, a Christian, enrolled in Spalding because of its strong emphasis on the Bible and its encouragement to be involved in the community and serve others. Currently enrolled in four advance placement classes, she boasts a weighted grade point average of 4.16.

While Audrey self-deprecatingly says she hordes “a lot of useless knowledge,” she has put it to good use. “Jeopardy!” will not be her national television debut, as she participated in the 2006 Scripps Howard National Spelling Bee on ESPN.

“I really like the idea of competing academically on a national scale again,” she said.

Battle-tested, Audrey took an online test on the show’s Web site, then succeeded during an in-person audition in Chicago attended by hundreds.

She doesn’t anticipate any trouble with the game show buzzer when it’s time to “answer in the form of question.”

“I was pretty on top of that,” she said of her audition’s buzzer use. “I’m an ice hockey goalie, so reflexes are pretty close to me. Hitting the buzzer is like second nature to me.”

Like many children in Anne Arundel County, Audrey played lacrosse. She switched to Spalding’s ice hockey team her freshman year.

“Hockey is very much a give and go sport,” she said. “Possession can change very quickly. Lacrosse is really the same way. The game can shift so quickly.”

Audrey knows fortunes on “Jeopardy!” are subject to change as well.

“You have no idea until they throw on the lights, the categories come up and they play the theme song what you’re going to be dealing with there,” she said.

Her parents said that Audrey is a humble person who continues to bring her family joy.

“I don’t think my feet have touched the ground,” Mrs. Hosford said. “There have been a lot of smiles. This is a nice accolade for her.”