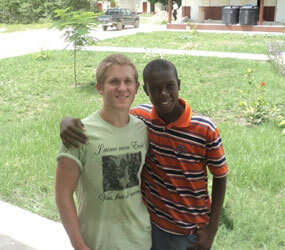 Brady McCaffrey is often the unsung hero on the football field for Archbishop Spalding in Severn.

Although he’s a running back, he takes on more of a blocking role and that means hits from defensive linemen and linebackers come regularly.

“Every now and then, I’m taking on the nicks,” he said. “I always want to give it my all and never take a play off.”

McCaffrey, a senior, rarely takes a day off in his life either. He’s a standout in the classroom, where he has a weighted 4.0 grade point average. He’s a member of the National Honor Society, the Spanish Honor Society and the Science Bowl team, which might help him figure out a potential college major. He’s currently contemplating pursuing an engineering or medical future.

McCaffrey, a parishioner of Our Lady of the Fields in Millersville, plays rugby in the spring as a flanker.

Although it’s a hectic schedule, it’s not one that rattles him.

“You just have to find a balance between sports and school,” McCaffrey said. “You’ve got to make sure you’ve got everything done. I’ve got a system down”

He was named to the all conference rugby team last season and anticipates focusing on that sport next year in college. He is currently looking at Virginia Tech, University of Maryland in College Park and Penn State University.

“I love the aggressiveness and challenge of it,” McCaffrey said of rugby. “It’s so much different than any sport I’ve played.

He traveled to Haiti with a group of 15 Spalding students to visit The Good Samaritans School in St. Marc, which was founded by Deacon Rodrigue Mortel, the Archdiocese of Baltimore’s director of missions. The students cleaned and painted additions to Good Samaritan.

“I just really wanted to help out in some way,” McCaffrey said. “It definitely gave me a new perspective on things.”