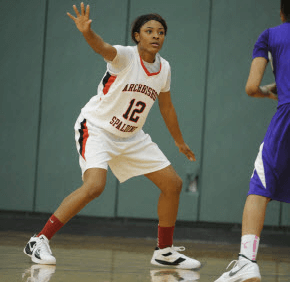 Bill “Bookie” Rosemond has coached many players at Archbishop Spalding, but never anyone for as long as he has coached Raven Makins, his first four-year varsity basketball player.

“It’s been a lot of fun watching her mature on and off the court,” Rosemond said. “The first year is tough. Being on the varsity with the upperclassman – there’s a lot of pressure. But she made the adjustment athletically and made the commitment.”

For her own part, Makins said she loves the team aspect of the game. That same love channels the passion she has for the game into the energy she displays on the court.

“I always had a passion for the game at a young age,” the senior shooting guard said. “I like the energy of basketball. I like how it’s up-tempo and I like the atmosphere of competing. I’m the type of player who likes diving on the ground for loose balls

Everyone wants to score, but you have to have someone who’s willing to put it out there and do the dirty work and show how much they want it. I think it shows my desire for the game.”

That desire has paid dividends for Makins, who worked her way into the starting lineup as a sophomore, helped Spalding win an IAAM A Conference championship last season and is dealing with the Feb. 18 heartbreak of a wasted 22-point lead and loss in the conference tournament final to McDonogh.

Makins, a team captain, is ranked 75th among shooting guards in the nation by ESPNU, and has verbally committed to play for Central Connecticut State University next year. She was also recruited by Towson University and Seton Hall University.

Makins is a member of the Black Awareness Club, which develops cultural awareness at her school, and the Fashion Club, an organization that’s currently having a prom dress drive to assist girls who are unable to afford costly prom dresses. She also assisted in building houses in Monroe, La., with Habitat for Humanity for two years.

Humble as can be, Makins said she’s grateful that the environment at Archbishop Spalding helped her mature and develop as a person, not just as an athlete.

“Coming here was a big change from public school,” she said. “All the administrators and staff were very helpful and were there for me. They count every individual as an individual, not just a number – that’s what kept me here. Being here prepared me for college because I had people helping me all the way and just encouraging me.”