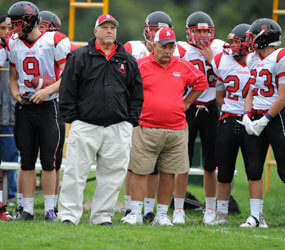 SEVERN – Mike Whittles was coming to terms with the fact that for the first time in his head coaching career, he was going to miss an Archbishop Spalding game.

With intravenous feeding and medication tubes running through him Oct. 21, he was laying in his Baltimore Washington Medical Center bed during the afternoon when his players filed into the room. In just a few hours, they had a game against Calvert Hall, but they needed to be with their leader in Glen Burnie first.

“Most of us were struggling to keep it together,” receiver Richard Gabelman added.

The story still brought goose bumps to Whittles days later as he spoke over the phone from the hospital.

“I can tell you that once they left, I had a good cry, but the difference was these were happy tears,” Whittles said.

Doctors told Whittles and his wife, Diane, Feb. 23 that there was a golf-ball-sized tumor wrapped around his pancreas and that he had Stage IV cancer.

“It completely blew my mind because I had a couple of CAT scans, a couple of MRIs and nothing came up,” Whittles said. “I kept asking if he had the correct chart.”

When Whittles broke the news to his three children – Jessica, Mike and Nick – there was one particular response that made the father swell with pride.

He’s been in the hospital since mid-October, but has been receiving radiation and chemotherapy treatments during the last several months. Despite his diagnosis, he missed just three practices until that point this season. The perpetually-positive Whittles has lost weight and hair during his illness. He insists that if you saw him, you wouldn’t know anything is wrong.

“With the pain I’m in, I’ve got to be medicated,” he said. “It’s mainly in my stomach and back. It could be the tumor pushing against the nerve endings in my spine.”

Soon after Whittles’ diagnosis, Spalding players were told in the school’s chapel. The squad had won last season’s Maryland Interscholastic Athletic Association B Conference title and thought they were being given their championship rings.

“I’ve never seen a group of guys go from cloud nine to feeling the worst (like that),” Gabelman said.

Whittles, who has been the Spalding coach since 1999, is known as a mountain of a man striding the sideline with boundless energy. He built the Cavaliers into a juggernaut that appeared in five of the last six B Conference championship games. It’s a far cry from the early days when Spalding struggled to get one win. Prior to his arrival, Spalding had gone through seven coaches in 15 seasons.

“I always thought we were going to go 9-0 every time we entered a season,” he says of the early years.

The team moved up to the A Conference this season thanks to the program’s success. None of it could have been accomplished without family support. Whittles’ parents live in Delaware but attend every game.

“My family is incredible,” he said. “It’s kind of funny how we’re all connected by this game.”

Whittles’ passion and compassion have earned him fierce loyalty, and quarterback Brian Louck refers to him as “the papa bear of our organization.” Some refer to him as their father.

“He’s always there for us,” center Matt Wicklein said. “He helps us, no matter what we do. If it’s bad, he always brings us up and gives us high spirits.

Diana had never been in the team’s locker room before a game until recently. Recently, Diana quietly walked in to locker room and saw her husband place his leg on a bench and face his team to deliver a pep talk.

“Mike was tired and his voice kept cracking,” Diane said. “He told them, ‘I just wanted to get back here. This is where I’m happy. This is my happy place. I just want you to be where your happy place is.’ It was just so neat to see him from that vantage point. They mean a lot to him. He loves them.”

The football community has shown its affection for Whittles as well. Gilman coach Biff Poggi donated $10,000 to Whittles. Spalding community members have been wearing bracelets and T-shirts emblazoned with the message “Keep fighting Coach Whittles.”

Many players are hoping he’ll be standing on the field Nov. 4 for senior night against Loyola Blakefield.

Whittles feels the prayers of people he doesn’t know.

“I tell you what, you get that diagnosis and you get faith real fast,” the parishioner of St. John the Evangelist in Severna Park said. “I do believe that without my faith, family, friends and football, I wouldn’t be here. If God wanted me, he’d already have me. He’s got other plans for me. I want to be able to share what I’m going through and tell people don’t lose your faith. This puts life in perspective.”

Conscious of his own mortality, Whittles said he’s “not going out without a fight.” “I don’t want to go anywhere anytime soon,” he continued. “I have a grandson. I want to see my other grandchildren. I want to take care of my wife, rather than my wife taking care of me. There’s so much I want to see and do.”

Among his tasks, he said, is to raise awareness of pancreatic cancer. With the deaths of people such as Apple co-founder Steve Jobs and former Curley soccer coach

“You don’t hear people going through stage one,” Whittles said. “There has to be a better way to detect this. My family shouldn’t be going through this.”

For more on this story, including emotional audio from Spalding players, visit CatholicReview.org/palmerblog.