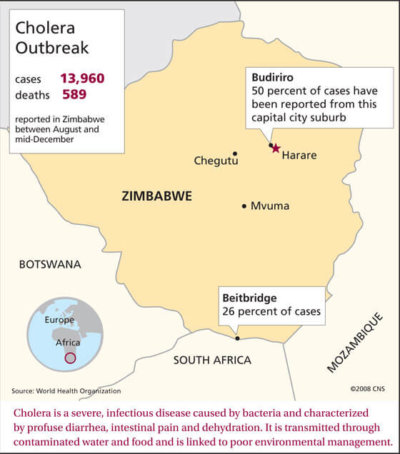 CAPE TOWN, South Africa – A Catholic parish on the South African border with Zimbabwe has been increasing its food supply to respond to the escalating number of Zimbabwean refugees fleeing a cholera outbreak.

The church in Musina, South Africa, has donated 250-300 food parcels daily since June as part of its response to the flow of refugees into the northern border town, which has gained some notoriety because of the spread of cholera from Zimbabwe, said Missionaries of the Sacred Heart Father Adrian McHugh, who ministers to asylum seekers.

This cross-border movement has grown since June from about 50 a day to 500, said Father McHugh. By Dec. 10, South Africa had reported nearly 500 cholera cases, including seven deaths. Since mid-August, Zimbabwe has reported nearly 14,000 cases of cholera and at least 800 deaths from the disease.

In Musina, refugees were living completely without shelter, with hardly any access to toilets, showers, food and clean water. Some refugees managed to have at least one meal a day thanks to the initiatives of the Catholic parish and the Anglican church, said Father McHugh.

He said many local volunteers had responded to the crisis, which belied the kind of xenophobic attitudes often associated with South Africans. The priest said many people are volunteering despite the great demands on the town’s limited resources and economic hardships that arose from droughts that struck the rural area. He ascribed such values-based attitudes to the abiding influence of the churches in the area.

Father McHugh said the international medical agency Doctors Without Borders set up mobile clinics at the showgrounds in the wake of the cholera outbreak.

He said that from the beginning of the crisis he had seen cooperation among aid agencies, including the Jesuit Refugee Service, the U.N. High Commissioner for Refugees, Lawyers for Human Rights, the local legal advice office and Save the Children.

The local home affairs office, he said, also has operated at the camp to process up to 300 asylum applications a day.

One report said thousands of asylum seekers were “staying on fenced-in showgrounds in Musina as they wait to lodge their asylum claims and are fearful of arrest and deportation if they leave.”

About 200-400 refugees are arrested and deported from Musina to Zimbabwe each day, reports said.

Zimbabwe’s cholera epidemic is made worse by its economic crisis. Inflation is officially 231 million percent, but prices double every 24 hours. Basic foodstuffs are running out, and the flow of refugees has spread the cholera to Mozambique, Botswana and Zambia, in addition to South Africa.