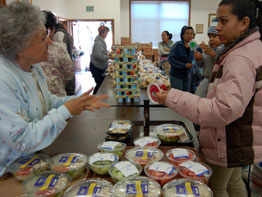 WASHINGTON – Theologian Georgia Masters Keightley believes the way Catholics live out their faith obligations to social activism ought first to be by creating neighborhood food pantries and participating in town council elections.

After she was elected mayor of her hometown of Crawford, Neb., in 2002, Ms. Keightley said, she changed her tune about political activism from what she stressed as a professor at Trinity College in Washington.

In three years as mayor – effectively the primary municipal employee of the rural, 1,100-person town – Ms. Keightley said she saw how small steps can make all the difference in helping people in need. For instance, the simple act of moving a food pantry to a less conspicuous location was a way of protecting the dignity of needy people who previously had to line up on Main Street in Crawford, she explained.

Now back in the Washington area, but not teaching, Ms. Keightley said her emphasis in the classroom today would be much less about obligations to participate in national politics. Instead, she would emphasize applying the church’s principles of social responsibility at the local level, “where you can really make a difference.”

Yet the kind of political involvement by Catholics that has been making national news in the last few months has been more of the highly partisan national variety, after two prominent priests and a Catholic law professor became publicly enmeshed in this year’s presidential campaigns.

These stories received wide national attention beginning in May:

– Chicago pastor Father Michael Pfleger was asked by Cardinal Francis E. George of Chicago to take a two-week leave from St. Sabina’s Parish after he mocked Sen. Hillary Clinton in a sermon at Trinity United Church of Christ, where Sen. Barack Obama used to belong. At the time of the sermon, the senators from New York and Illinois, respectively, were in contention for the Democratic presidential nomination and the priest’s words received wide play, especially on the Internet. Obama, who formally resigned his membership in the church in May, is now his party’s presumptive nominee.

– A priest of the Diocese of Rockville Centre, N.Y., Monsignor Jim Lisante, a regular commentator on some network television programs, apologized after criticism of his invocation at a Republican Party dinner in which he endorsed Sen. John McCain, the presumptive Republican nominee for president.

– Douglas Kmiec, a law professor at Pepperdine University in Malibu, Calif., and former dean of the law school at The Catholic University of America in Washington, recounted being refused Communion by a priest who excoriated him from the pulpit at the same Mass for his endorsement of Obama. Kmiec, a renowned opponent of abortion, was criticized for endorsing Obama, who supports legal abortion. In his endorsement Kmiec made clear he and the candidate disagree on abortion, but said he sees Obama as willing to work toward reducing the number of abortions.

Questions about whether those types of actions are appropriate by the church’s standards and what an individual Catholic’s role ought to be in the political world are what the U.S. Conference of Catholic Bishops attempts to answer in its regular public statements on political responsibility.

The bishops’ most recent statement, “Forming Consciences for Faithful Citizenship,” notes that “in the Catholic tradition responsible citizenship is a virtue, and participation in political life is a moral obligation.”

It quotes the Catechism of the Catholic Church in explaining that “it is necessary that all participate, each according to his position and role, in promoting the common good. This obligation is inherent in the dignity of the human person. … As far as possible citizens should take an active part in public life.”

But that obligation comes with different responsibilities for laypeople and those in religious life.

Moral theologian Germain Grisez, a professor at Mount St. Mary’s University in Emmitsburg, Md., explained that “part of the vocation of laypeople is to be secularly involved.”

However, as Father Pfleger found out when he was reprimanded for his partisan sermon, Grisez said, “It’s not proper for someone with a vocation to the priesthood or religious life to participate in civil government at the executive or judicial level, and in general it’s not appropriate for them to be active in partisan politics.”

Grisez said the reason for church leaders to keep their distance from partisan political activity is that “it tends to make people think the church has a view it doesn’t. It’s impossible for priests and bishops to speak out in public without people thinking it is the church speaking.”

The United States isn’t the only place where partisan political activism is deemed inappropriate for the clergy. In Paraguay, retired Bishop Fernando Lugo, 57, was elected president in April. He retired as bishop in 2005 and was suspended from priestly ministry when he ran for president. The Vatican rejected his petition to be laicized. Bishop Lugo will be inaugurated as president in August.

Mercy Sister Sharon Euart, a canon lawyer and the new executive coordinator of the Canon Law Society of America, said it’s up to the local bishop or religious provincial – or the Vatican, in the case of a bishop – to determine whether political activities are “inconsistent with the priestly state.”

She said church laws addressing partisan political activity are rooted in the notion cited in Canon 287 that “clerics are always to foster the peace and harmony based on justice which are to be observed among people.”

“The restriction on political activity is based on the distinctive role of clergy in relation to laity,” Sister Euart said. “Political activity ordinarily belongs to the laity. Priests are not forbidden to belong to political organizations; they are not to play an active role in political parties, or in the governing of unions.”

Though political parties and unions “are good things in themselves,” she continued, active roles in them are considered by the church as “incompatible with the clerical state” because such participation brings the potential danger of causing division in a diocese or parish community.

Mark Chopko, former general counsel to the USCCB and now in private law practice at Stradley Ronon Stevens & Young, spells out another whole set of considerations governing political involvement by church leaders – the implications for their status as tax-exempt charities.

Maintaining an organization’s tax-exempt status requires that it not participate in a wide range of political activities, such as intervening in individuals’ campaigns. Harder to define legally, however, is when the political actions of an individual can be attributed to the institution with which he or she is identified.

Chopko said the Internal Revenue Service is always on the lookout for such cases.

In an article in the spring 2008 edition of Church magazine, published by the National Pastoral Life Center, Chopko distinguishes between the “moral voices of pastors and people calling the body politic to consider the intrinsic values molded by religious principles,” and the numerous voices urging church leaders to become directly involved in electoral politics.

“The church calls for a different kind of political engagement: one shaped by the moral convictions of well-formed consciences and focused on the dignity of every human person, the pursuit of the common good and the protection of the weak and vulnerable,” he wrote.