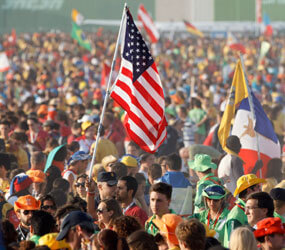 TORONTO – Alan Law wanted to know why the gates were closed so early at Cuatro Vientos airbase on the eve of the papal vigil at World Youth Day. So he posed this question on the wall for the official World Youth Day Facebook group, run by event organizers.

“Why were the gates closed so early? A lot of people were locked out,” wrote Law, a product development manager with Tour Design, a travel company that took many Canadian pilgrims to Madrid.

He waited for a response but heard nothing. So the next day, he checked again. His comment had been erased.

As group leaders and pilgrims return home after World Youth Day, discontent at the fact that up to 250,000 pilgrims were locked out of Cuatro Vientos airbase for the overnight vigil and closing Mass continues to be vocalized. About 1.4 million pilgrims showed up for the overnight vigil, and World Youth Day organizers were equipped to handle only about a million, turning away registered pilgrims from around the world.

“It is the recommendation of the Office of Catholic Youth of the Archdiocese of Toronto that we do not go so far as to request refunds or do any type of formal protest just because we understand that we’re dealing with the church here,” said Christian Elia, director. “The church in Spain already has financial issues and, as an act of charity, we’re not going to take those actions.”

However, individual pilgrims have told Elia they will be writing letters to World Youth Day organizers in Madrid and the Madrid cardinal’s office.

“A lot of people aren’t enthusiastic about going to Rio do Janeiro because with less than two years until the next World Youth Day, it’s hard to imagine how a less-developed nation will do a better job than a more developed Western European nation,” said Elia.

But while the aftermath is starting to be felt, some organizers say it’s still too early to see the real ramifications.

Sister Eileen McCann, a sister of St. Joseph and coordinator of World Youth Day groups for the U.S. Conference of Catholic Bishops, said she has sent a formal evaluation form to all group leaders and bishops. Sister Eileen said she is sure the scene at Cuatro Vientos is going to be one of the top complaints from pilgrims.

“There was absolutely no justification for the mess at Cuatro Vientos,” said Sister Eileen. “No one credentialed should have been closed out of there.”

However, she said, her experience from attending eight World Youth Days is that whatever aspect of World Youth Day goes wrong goes quite smoothly at the next international venue.

“In Sydney, the bishop credentials were atrocious and this year (they) had only minor glitches,” she said.

She said she was surprised by the lack of complaints she has received.

Basilian Father Thomas Rosica, CEO of Salt and Light Television and head of World Youth Day when it was held in Toronto in 2002, said many Canadian pilgrims were left out of the final events.

“We experienced problems with pilgrim accommodations, bishops’ registrations, press credentials and numerous other matters,” he said.

For Malcolm Hart, senior youth ministry projects officer for the Australian bishops’ Commission for Pastoral Life, only time will tell how the events at Cuatro Vientos will affect future participation.

“Over the coming months, I will be listening to Australian pilgrimage leaders’ experiences and providing feedback to the Australian Catholic Bishops’ Conference about how we can continue our participation in international World Youth Day gatherings,” he said.