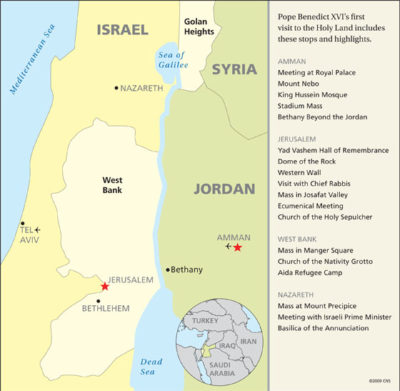 JERUSALEM – Middle East Christians hoping to see Pope Benedict XVI during his May 8-15 pilgrimage to Jordan, Israel and the Palestinian territories faced some travel restrictions.

One week before the pope’s May 11 arrival in Israel, some 250 Christians from the Gaza Strip were still waiting to receive an answer about their travel permit requests.

Monsignor Manuel Musallam, pastor of the only Catholic parish in Gaza, said although the requests were made several weeks earlier, by May 4 he had received no response from Israel’s Civil Administration authority, which is responsible for issuing the permits.

Most Gaza residents have been unable to leave the Gaza Strip for nearly two years following an Israeli-imposed closure of the border crossings after the Islamic militant group Hamas takeover of the area.

Wadie Abunasser, head of the communications committee for the May 11-15 visit to Israel and the West Bank, said that since the pope is unable to go to Gaza because of security and logistical reasons the church has asked that Christian Gazans be allowed to participate in the May 13 Mass in Bethlehem, West Bank. He has said that time has been set aside for the pope to meet with a group of Christians from Gaza during his visit in Bethlehem.

The West Bank, like Gaza, is under Palestinian jurisdiction, but it is controlled by the Fatah political movement, not Hamas.

In Israel, the pope also will celebrate Masses in Jerusalem and Nazareth. Abunasser said earlier that the travel permits Israel normally issues to West Bank Christians for the Easter holiday were extended until the end of the pope’s visit, and he expected about 11,000 West Bank Christians to have permits for the visit to Israel.

Among the pilgrims in Jordan will be some 500 Lebanese in a tour arranged by the Voice of Charity, a Christian radio station that broadcasts throughout the Middle East.

Most Lebanese will not travel to Israel to see Pope Benedict because, since 1948, Lebanon and Israel have been considered at war. Therefore, Lebanese are prohibited by the Lebanese government to travel to Israel, although special exceptions are made for people like bishops.

In addition, some other Arab countries – including Iraq – do not allow their citizens to travel to Israel.