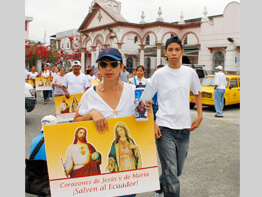 LIMA, Peru – A conflict between Ecuadorean President Rafael Correa and Catholic Church leaders in the country’s biggest city has grown more pronounced as a referendum nears on the new constitution.

Priests in the southern city of Guayaquil celebrated Mass outside their churches Sept. 14 to urge Catholics to vote against the new constitution in a referendum scheduled for Sept. 28.

The outdoor Masses were held only in Guayaquil, but priests in other areas of the country and Ecuador’s Catholic bishops’ conference have been critical of the new 444-article constitution completed in July.

President Correa, a devout Catholic, blasted this interpretation at a press conference Sept. 12 during a brief visit to Lima, the Peruvian capital.

President Correa predicted that the constitution, which he demanded be rewritten almost immediately after taking office in early 2007, would be passed by a 3-1 margin by his country’s predominantly Catholic electorate.

He blamed the problem squarely on church leaders in Guayaquil, who were not representative of Ecuador.

“The church in Guayaquil is the last bastion of conservatism in the country. The mayor of Guayaquil has said he would reject the constitution even if it wins, which is a very dangerous attitude that is supported by the church there,” President Correa said.

He compared the opponents in Guayaquil to violent protesters demanding autonomy in Bolivia’s lowland states.