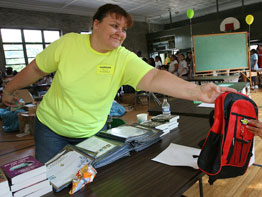 WASHINGTON – The Society of St. Vincent de Paul, one of the oldest lay service organizations in the U.S., will mark its 175th anniversary with what it has been doing for all those years: serving the poor.

The organization has planned a special event to highlight its work and raise money for the poor. A nationwide event called “Friends of the Poor Walk” will take place Sept. 27, the feast day of St. Vincent de Paul.

Diocesan councils, district councils and parish-based conferences of the Society of St. Vincent de Paul have all been invited to participate; walks will be organized locally.

As of June 17, 61 walks had been scheduled across the country. Among the walk sites are big cities such as New Orleans, Philadelphia, Washington, St. Louis and New York.

Individuals and groups can register for the event on the walk’s Web site, www.svdpfriendsofthepoorwalk.org.

“The number is growing every day. There has been a massive outpouring of support,” walk administrator Chris Desloge told Catholic News Service.

In late May the organization named Deacon Alex Jones as honorary national spokesman for the walk. Deacon Jones was a popular evangelical pastor who joined the Catholic Church in April 2001, along with his wife, Donna, and members of their family as well as several members of one of his former congregations.

He was ordained a deacon for the Detroit Archdiocese in October 2005. He serves three parishes in the archdiocese.

Deacon Jones, who plans to participate in one of the walks, will be issuing video addresses leading up to the event that will appear on the society’s Web site, www.svdpusa.org, and on other Internet sites such as YouTube.

Each walker raises money by getting others to sponsor him or her, and all money collected will “go directly into the hands of the (society’s) local conferences” to help the needy in their local areas, Desloge said. A number of corporate sponsors are also supporting the walk.

He said the council or conference that collects the most money from the walk will receive the use of a mobile kitchen known as Hope to serve needy people for a period of time.

The 42-foot-long semitrailer can be transported anywhere. It is fully equipped with a grill, adequate prep area, refrigerators and many other kitchen necessities and is capable of serving thousands of meals per day.

The Society of St. Vincent de Paul first received the semitrailer to serve people in the aftermath of Hurricane Katrina.