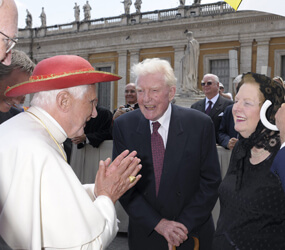 VATICAN CITY – When different religions are protected and respected rather than ignored or attacked, society benefits from a climate of dialogue and a commitment to upholding common values, Pope Benedict XVI said.

In separate speeches May 29 to new ambassadors from India and from New Zealand, the pope discussed religious freedom, dialogue and the role of religion in public life.

Welcoming Chitra Narayanan as India’s new ambassador to the Vatican, Pope Benedict expressed his “deep concern for Christians who have suffered from outbreaks of violence” in some parts of India in recent years; the attacks in Gujarat and Orissa states were seen as part of a campaign by militants to make India a Hindu nation.

The pope thanked the Indian government for assisting victims of the violence and for taking steps to ensure the perpetrators would be brought to justice.

“I appeal to all to show respect for human dignity by rejecting hatred and renouncing violence in all its forms,” he said.

Pope Benedict told the new ambassador that her country “is a land fertile with ancient wisdom,” where the majority of people seek “self-awareness, integrity and harmonious coexistence” with their neighbors.

In such a populous nation with such a diversity of religions and cultures, the pope said, the promotion of dialogue can be an example to countries throughout Asia and around the world.

“For her part, the Catholic Church in your country will continue to play a role promoting peace, harmony and reconciliation between followers of all religions, especially through education and formation in the virtues of justice, forbearance and charity,” the pope told Narayanan.

Welcoming Robert Moore-Jones as New Zealand’s new ambassador, the pope said the country’s religious and cultural diversity – which is increasing because of immigration – is a form of wealth.

While interreligious dialogue has been fruitful in New Zealand, “some continue to question the place of religion in the public sphere and struggle to imagine how it might serve society, particularly in a highly secular culture,” the pope said.

“This, of course, heightens the responsibility of believers to bear witness to the significance of the essential relationship of every man and woman to God, in whose image they are made,” he said.

In fact, the pope said, human dignity is a result of being created in God’s image, as is the human urge to seek truth and goodness.

“When humanity’s spiritual heart is brought to light, individuals are drawn beyond themselves to ponder God and the marvels of human life: truth, beauty, moral values and relationships that respect the dignity of others,” he said.

When followers of different religions engage in dialogue, they discover their common dignity and common values, which society needs in order to overcome power plays and work for the common good, he said.

The search for truth does not threaten tolerance, but rather “makes consensus possible, ensures that political choices are determined by principles and values and enriches culture with all that is good, uplifting and just,” Pope Benedict said.