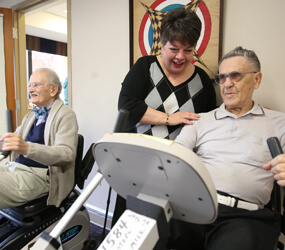 Sherry Parrish looks at the residents of Charleston Retirement Community in Catonsville and feels inspired.

Many residents there have moved on to a different stage in their lives, selling homes they shared with a longtime spouse and perhaps raised their children.

Parrish said these people have made bold leaps.

The community strives to facilitate communities through shared gifts, which celebrate life, Parrish said. The result is that people have many different avenues to create a truly social environment.

“This is a city,” Parrish insisted. “This is not just a retirement home. This city has 2,400 residents.”

Parrish said the most important stated need for residents is socialization.

Since much of the physical work associated with owning a home is taken care of through various public works offices at Charlestown, there is more time for residents to be engaged socially and psychologically in the community.

Parrish said her staff listens to what residents are interested in doing. If a person says he or she is active in a particular subject – say, quilting – and there is no club, residents are encouraged to head up a new group.

“We don’t plant the plant,” Parrish said. “We go out into the forest and say, ‘Oh, look at that sapling.’ We encourage and nourish that sapling to grow because that sapling is indigenous to this and will grow healthier, happier and more fruitful if it is genuine.”

The residents take ownership of their surroundings. The monthly schedule of activities looks like a book in size, with nearly two or three pages dedicated to one day. Currently, there are 216 resident-run clubs to participate in at the retirement community, which has an average age of 82.

The Charlestown community alone has seven restaurants on the premises, three stores and an auditorium that regularly features movies. Some of the restaurants offer a happy hour and there is a tavern on site as well.

Parrish, who hosts an Emmy-winning reality show for Retirement Living TV, has a motto for everyone in her sight: “Let’s go!”

“The key to success boils down to one thing,” Parrish said. “It’s in their ability to get up, meet a new person and make a friend.”