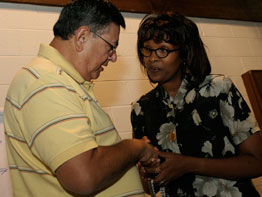 ATLANTA – During a discussion on racism at an Atlanta institute for Catholic social advocates, a theology professor told participants the Catholic Church has not been a beacon of racial justice in the United States, but has the tools to be an advocate for racial reconciliation.

“U.S. Catholics have not been immune to the racial virus that has infected American society. In fact, in many ways, we have aided and exacerbated it,” Father Bryan Massingale said to a crowded room.

The priest, who teaches at Jesuit-run Marquette University in Milwaukee, was one of the speakers at the 23rd annual Social Action Summer Institute July 20-25 at Oglethorpe University.

More than 200 Catholic leaders from across the country participated in the program, examining racism, digging into the church’s moral teachings and studying how to build coalitions with people of other faiths.

The aim was for advocates to take home what they learned and enliven programs at local parishes in dioceses across the country, said Susan Stevenot Sullivan, director of parish and social justice ministries for Catholic Charities of the Atlanta Archdiocese. Her ministries office organized the program.

Father Massingale, who is writing a book about the Rev. Martin Luther King Jr.’s teachings and links with Catholic social teaching, said the U.S. bishops have not been as forceful talking about race as they are on other pro-life issues, despite Pope John Paul II linking racial reconciliation to the pro-life movement, he said.

“It’s a lack of passion, a lack of priority. Standing against racism is not a core component of Catholic identity,” said Father Massingale, a priest of the Milwaukee Archdiocese.

However, he said the church has the tools to be a voice for justice.

“We begin with hope. There’s nothing to decree from Mount Sinai that God said there must be racism in human society,” he said. “What human beings divide, break and separate, we can also heal, unite and restore with the help of God.”

A frank discussion about racism can cause people to squirm, said some people.

“It’s a dirty little thing we don’t talk about. To think this is part of the church is hurtful,” said James Satterthwaite, a campus minister in the Diocese of Richmond, Va.

“We’re in separate worlds,” said Father Williams, who spoke about building a pastoral response to racism.

Overall, he said, the Catholic Church has earned a B-minus on matters of race. Bishops address racial issues with documents, but little is done to change behavior in parishes, he said.

Father Williams said people are paralyzed by conversations about race when they are controlled by the fears of looking ignorant and feeling guilty.

People need to approach the issue with “passion” and also “compassion,” said Father Williams, who is Catholic Charities’ senior director of racial equality and diversity initiatives.

He is the founder and director of the Institute for Recovery From Racisms. The organization’s Web site is www.racialsobriety.org.

“Feel guilty if you don’t respond (to new understanding.) But don’t feel guilty for history. You didn’t make the history,” he said.

According to the U.S. Conference of Catholic Bishops, about there are 2.3 million African-American Catholics. There are 1,300 parishes that are predominantly African-American; approximately 250 priests, 300 sisters and 380 deacons are African-American.

“Catholic social teaching is a proud legacy that we hold and cherish,” he said.

“The work of promoting and defending human dignity has never been popular since it so often flies in the face of prevailing public opinions and attitudes. Nonetheless, it flows from our identity as Christ’s followers to work for justice for those who live on the margins of society as did Jesus himself,” he added.

Archbishop Gregory said the church’s voice on social justice must include care for the environment.

“We are summoned to see the environment as a common treasure and a joint inheritance that we must preserve for those generations that will follow us,” he said.

“Our concern for the earth fits the parable paradigm quite appropriately since so many of Jesus’ parables begin with the things of nature and presume that there will be seeds and fields and plants and vineyards that are capable of producing a harvest tomorrow – whether tenfold, or thirtyfold or even a hundredfold,” he said.