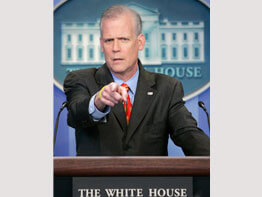 WASHINGTON – Anthony “Tony” Snow, former White House press secretary and a prominent journalist who worked both in print and broadcast, died July 12 at Georgetown University Hospital in Washington after a long bout with colon cancer. He was 53.

A private funeral service was to be celebrated July 17 for Mr. Snow at the Basilica of the National Shrine of the Immaculate Conception in Washington.

President George W. Bush, for whom Mr. Snow worked as press secretary, was expected to attend.

As Mr. Snow battled cancer, his faith deepened, something that was reflected in the commencement speech he gave at The Catholic University of America in Washington in May 2007. He titled his speech “Reason, Faith, Vocation.”

“Faith is as natural as the air we breathe. Religion is not an opiate, just the opposite,” he said. “It is the introduction to the ultimate extreme sport. There is nothing that you can imagine that God cannot trump.”

Mr. Snow had been diagnosed and treated for cancer before becoming White House press secretary in May 2006. Shortly before his Catholic University address, Mr. Snow had announced the return of his cancer, and in his remarks to the graduates, he said he had received numerous messages with promises of prayer for him.

“Never underestimate the power of other people’s love and prayer. They have incredible power. It’s as if I’ve been carried on the shoulders of an entire army,” Mr. Snow said.

In a statement released July 14 by Catholic University, Vincentian Father David M. O’Connell, university president, recalled that Mr. Snow “was so generous with his time, offering to pose with any of the graduates who approached him; Tony was eager to tour the campus and basilica after the ceremony and left CUA that afternoon to spend time with his family. ‘They are my priority,’ he told me.”

“May he live in the joy and peace of the promised eternity he spoke of at commencement,” Father O’Connell said.

Eternity is something Mr. Snow spoke of at one point in his commencement address. “No matter how lousy things may seem, you’ve got the breath of life. And while God doesn’t promise tomorrow, he does promise eternity,” he said.

After hearing the news of his death, President Bush and his wife, Laura, were among those praying for Mr. Snow and his family. They attended church July 13 and prayed that Mr. Snow’s family may “find comfort and strength during this tough time for them.”

In remarks on the South Lawn of the White House after returning from a weekend at Camp David in Maryland, Bush echoed Father O’Connell’s sentiment about the value Mr. Snow put on family.

Mr. Snow worked for numerous newspapers, holding a variety of editorial positions, from 1979 until 1991. Mr. Snow served as editorial page editor for two dailies, the Detroit News and later the Washington Times. In 1991 he left newspapers to become deputy assistant to the president for communications and director of speechwriting for President George H.W. Bush. After leaving the White House, Mr. Snow continued to write editorials for the Detroit News and USA Today while also working in television.

After working with the first President Bush, Mr. Snow went on to work briefly with ABC News before settling in with the Fox News Channel for many years. Mr. Snow anchored the “Fox News Sunday” show beginning in 1996.

In 2003 Mr. Snow launched a Sunday morning show called “Weekend Live with Tony Mr. Snow” as well as “Tony Mr. Snow Live” for Fox News Radio, where he continued to work until returning to the White House to serve as press secretary for the current President Bush.

Mr. Snow was born in Kentucky and grew up in Cincinnati. Mr. Snow attended Davidson College in North Carolina, where he graduated with a bachelor’s degree in philosophy in 1977.

He is survived by his wife, Jill, whom he married in 1987, and their three children, son Robbie and daughters Kendall and Kristi.