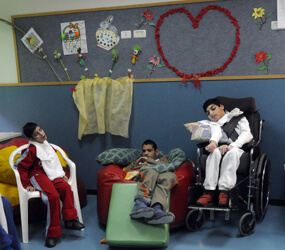 HAIFA, Israel – The creamy stones of the Sacred Heart Home gleam in the sun, and squeals of delight echo in the corridors when Sister Pascale Jarjour enters a room.

When she talks about an individual child’s case, tears fill her eyes. But when she’s with one of her 60 little charges, it’s all smiles, caresses and kisses.

Sister Jarjour is one of four members of the Daughters of Charity of St. Vincent de Paul and 105 staff members who care for the 60 severely physically and mentally disabled children who call Sacred Heart their home. Two hundred children attend the day care center in the same compound.

Like the inhabitants of Haifa itself, the residents and staff of the home are Muslims, Jews, Druze and Christians.

Some parents arrange for their children’s baptisms or bar mitzvahs while they are at the home, and several take their children home briefly for their own religious holidays, Sister Jarjour said. During Passover this year, one couple brought everything needed for a Seder and celebrated with their 1-year-old son who suffered severe brain damage as a result of choking.

“Whether we are Christians, Muslims, Druze or Jews, suffering is the same and the small joys are the same,” Sister Jarjour said.

“Many families say they want to share this experience with the politicians, to say to them, ‘We can live together,’“ she said.

The Lebanese-born sister has worked in Israel for 30 years and spent the last 20 of them in Haifa at the home for disabled children, who range in age from 2 months to 21 years.

While only about 5 percent of the children are from Christian families, Sister Jarjour said the work “has been a profoundly Christian experience.”

“I would love to tell everyone about Jesus, but in this situation I cannot,” she said. “However, in this work, what you do is more important that what you say, and people see what we do.”

The middle section of the U-shaped building houses the dining rooms, special rooms for physical therapy, music therapy, speech therapy and sensory therapy, the laundry and administrative offices. One floor in each of the two other wings is divided into three- or four-bed rooms for the residents. The rooms are sparkling clean, and every surface not covered with medical equipment is topped with a stuffed animal, rattle or other toy.

Classrooms fill the downstairs of one wing since all children in Israel have a right to education, no matter how challenged they are.

The ground floor also houses a room with no windows, extra-thick, reinforced walls and space for 60 beds – a place of safety for the students and staff in case of war. It was used as recently as 2006 when rockets hit Haifa during fighting between Israel and Hezbollah militants in Lebanon.

The building originally was a Catholic school run by the Daughters of Charity. It was closed for several years, then the sisters reopened it in 1975 as a home for disabled children and gradually remodeled the entire facility to make it totally accessible, cheerful and well-equipped.

“We have a very good, professional staff” and a specialized program of medical care, therapy and education for each child, she said.

Behind the physical therapy room – basically a gymnasium filled with padded mats, colorful balls and assorted equipment – Sister Jarjour points to the site of her big dream: an undeveloped part of the garden where she longs to see a swimming pool for water therapy and splashing fun.

Most of the children come from northern Israel, but the residents include little ones from all over the country. About 45 percent of the parents visit regularly, she said.

The home invites the families, including siblings, to a big party each year to mark Christmas, Hanukkah and the end of Ramadan, Sister Jarjour said.

“The children do not understand the religious feasts, but they know it is a party,” she added.