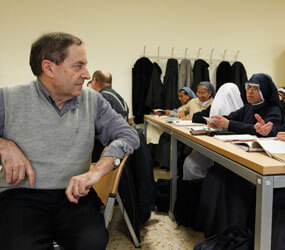 VATICAN CITY – Being the point person for promoting a sainthood cause requires the combined qualities of a private investigator, a theologian, a lawyer, a historian and a medical examiner.

But, most of all, it seems, patience and attention to detail are what’s needed to be a postulator – the key person promoting and shepherding the cause through each stage of the process, which often takes decades.

Teaching future postulators to navigate the process is the job of the “Studium,” a two-month course in Rome offered each year by the Congregation for Saints’ Causes.

The congregation runs the course “because it’s the only entity that can teach both the theory and the practice,” said Archbishop Marcello Bartolucci, secretary of the congregation and the lecturer for six of the classes.

The 2011 “Studium” sessions, which are offered only in Italian, ran Jan. 10-March 11 and brought together 80 students from a dozen countries; there were laymen and women, civil lawyers and canon lawyers, theology students, priests and nuns.

“The main reason people enroll in the Studium is curiosity and interest in a subject that fascinates,” the archbishop said.

Lucia Abignente, a member of the Focolare Movement, said that when she was living in Poland, she was asked to translate some documents into Italian for the causes of potential Polish saints. She said she found the work so interesting that she decided to take the course.

“This isn’t just about working on a process and seeking the truth – which is important – but about living in a strong communion with these candidates” and learning to live a Christian life like they did, Abignente said.

Some of the students will never be involved in a sainthood cause, Archbishop Bartolucci said, while others could be postulators or members of diocesan tribunals investigating whether a candidate heroically lived the Christian virtues or whether there are grounds to believe a miracle took place through their intercession.

Almost always, he said, the congregation requires a person to complete the course before being certified as a postulator.

Because most of the Studium sessions were taught by officials of the saints’ congregation, the students got plenty of very concrete tips, including this one from the archbishop: “Interview eyewitnesses in a place that does not belong to the candidate’s religious order. Once the good sisters start cooking, it could influence what people say.”

More seriously, during his lecture March 1, he told the students, “Saints’ causes are judicial cases that must follow a precise procedure, because a person who is beatified is a ‘public good’ of the church, and a saint is even more so.”

“The juridical formalities are not simply formalities, but provide the maximum guarantee that the process was carried out seriously,” he said.

Andrea Ponzone, a 32-year-old canon lawyer on a diocesan tribunal in northern Italy, said his bishop wanted someone on staff who could work on the cause of a local 18th-century priest.

“The process is juridical, so knowing canon law helps a lot, although unlike marriage cases, sainthood causes also involve experts in church history and theology and you need medical experts,” Ponzone said.

Dr. Patrizio Polisca, the pope’s personal physician and head of the sainthood congregation’s medical commission, taught two Studium sessions dedicated to how the Vatican handles the possible miracle needed for a candidate’s beatification or canonization.

The physician told students over and over March 3 that the medical commission he heads makes no judgments about miracles, one way or another.

“The only thing a scientist can say is that a healing does or does not have a biological explanation,” he said.

“A miracle is a theological judgment” that God made something extraordinary happen, the doctor said. In the sainthood process, that judgment comes from the pope after listening to the recommendations of theologians and of the cardinals and bishops who are members of the congregation.

“When dealing with events that appear marvelous and may be miraculous,” the members of the medical commission study the original diagnosis and prognosis, the normal course of that particular illness, what therapy was applied and what, if any, relationship that therapy could have had on the outcome, he said.

The physicians’ proclamations are “never absolute” – such as saying, “there’s no way this could happen naturally” – because medical science is constantly evolving, he told the students.

In an interview later, he said that while a couple of scholars had gone back and studied old “miracles” from the congregation’s files, as far as he knows, so far no one has found anything accepted long ago as a miracle that now has a medical explanation.

But modern medicine has brought changes to what kind of cases can be presented and when, he said. For instance, while Archbishop Bartolucci told the students that the congregation wants a patient to be healthy for at least 10 years after being cured of cancer, Polisca said that with some types of tumors, specifically certain types of brain tumors, the doctors would want even more time to pass before they would tell the pope that a patient was healed and not simply in remission.

Polisca said the church’s criteria for determining a miracle are based on the conditions set out in 1734 by Pope Benedict XIV: The illness must have been serious; it must not have been an illness that is known to clear up spontaneously; the healing cannot be attributed to any drugs or treatment administered; and the healing must be complete and lasting.