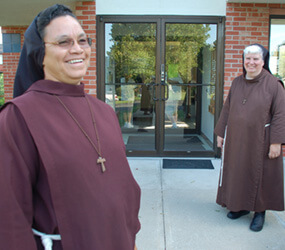 INDEPENDENCE, Mo. – A 17-year-old man confined in the Jackson County Jail as he faced serious felony charges now has an entire community of sisters praying for him.

If he needs any help to turn his life around, the Sisters of St. Francis of the Holy Eucharist will provide it as best they can.

But he should know now that he is loved, said Sister Connie Boulch, one of the two sisters who helped police capture the burglary suspect, later identified as Cory D. Anderson, as he tried to cut through their motherhouse property in northern Independence.

“I hope we get a chance to talk to him,” said Sister Connie, the community’s vicar who also works as the director of the Office of Consecrated Life for the Diocese of Kansas City-St. Joseph. “I would like to tell him that he was on our property not by accident, but by providence.

“This young man has his whole life ahead of him,” she told The Catholic Key, newspaper of the diocese. “He has the opportunity to change. I know that the prayers of the sisters will be with him for a long time.”

Sister Connie rose at 5 a.m., as she always does, on Aug. 13 to pray in the motherhouse chapel before reporting to work at the diocesan chancery.

Shortly before 7 a.m., she opened a window in her office, not far from the chapel, to let in the early morning air for herself and Sister Catarina da Silva.

Sister Catarina saw a young man walking through the soybean field on the 82-acre property.

“We saw him dragging something. We thought he was poaching deer,” Sister Connie said.

The sisters got in Sister Connie’s car, drove to the edge of the field and called the young man over. He immediately dropped what he was dragging, but approached the sisters still carrying a small tree limb saw and a pair of red boxing gloves. The item he dropped was a shotgun, and all three items were later discovered to be stolen from a nearby residence.

At no time did the young man threaten the two sisters in any way, Sister Connie said.

“He walked right up to us,” she said. “I asked him what he was doing, and he told us he was cutting through to a friend’s house. I asked him to tell me the name of his friend, and he couldn’t do it. I told him that he shouldn’t be on our property and we were going to call the police.

Sister Catarina, 49, a native of the Brazilian jungle where the Sisters of St. Francis of the Holy Eucharist long had a mission, gave chase, wearing a pair of flip-flop sandals on her feet and her modified brown habit, while Sister Connie called police.

She caught up with him, after a few hundred yards, near the convent.

“He wasn’t a cross-country runner. He was completely out of breath,” Sister Connie said.

Sister Catarina told the young man to wait, but just before police began to arrive, he ran again into the nearby woods.

Soon, the property was full of police and search dogs, and helicopters hovered overhead.

Using tracking skills she learned as a child, Sister Catarina led an officer in a patrol car to the area where the young man entered the woods. As they continued their search, Sister Catarina saw a baby deer caught in a barbed-wire fence at the property’s border.

Although the officer told her that getting out of the car would be dangerous with all the search dogs in the area, she insisted that they stop.

Sister Catarina and the officer abandoned their search for the young man, and cut the fence to free the tiny deer.

“He was only 7 or 8 months old, but he was strong,” Sister Catarina said. “There was a line of deer off in the distance. When he was free, he made a little noise to call his momma, and ran to those deer.

“The policeman said to me, ‘We did some holy work today,’“ Sister Catarina said.

After the young man was captured, the police asked Sister Connie if the sisters wished to file trespassing charges.

“I said, ‘No, I think he is in plenty of trouble already,’“ she replied. “Then I started praying for him.”

At 5 p.m. Mass that evening at the motherhouse chapel, the community continued to pray for Anderson, who has since been charged with first-degree burglary and stealing a firearm; both are felonies. He was being held on $10,000 bond.

The community recognizes that the God-given dignity of the young man’s life can never be taken away, said Father Steve Hansen, pastor of Immaculate Conception Parish in Lexington who celebrated Mass for the sisters that day.

“Christians see dignity even in criminals,” Father Hansen said in his homily, after a reading from Chapter 18 of the Gospel of St. Matthew that just happened to center on the power of forgiveness in the parable of the unforgiving servant.