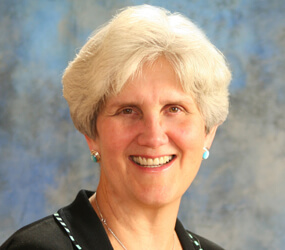 “This is an exciting time in the history of our Congregation as we strive to work as one international community, carrying our message of ‘Good Help to Those in Need’ around the world,” said Bon Secours Sister Patricia A. Eck, who was elected the new leader of her congregation during its 2009 General Chapter meeting in Rome.

The Bon Secours Sisters also announced that their congregation will transition to a new organizational structure by eliminating provinces and functioning as one international entity under Sister Patricia’s leadership. The religious community is comprised of sisters from five countries: the United States, France, Great Britain, Ireland and Peru.

A new congregation team also was elected to serve with Sister Patricia.

Newly appointed country leaders include Sister Rose Marie Jasinsk, from the United States, Sister Marie Ryan from Ireland, Sister Ann Morrison from Great Britain and Sister Rosalinda Pajuelo Urena from Peru. The new international leadership team will work to unite the sisters around the world around a new governance structure.

“I am honored and privileged to have been chosen to lead the Congregation of the Sisters of Bon Secours at this time and will build on the rich tradition of those very strong women who have come before me while helping the Congregation evolve to meet today’s needs,” Sister Patricia said.

Since 1997, Sister Patricia has served as the chairperson of the board of Bon Secours Health System, Inc., headquartered in Marriottsville.

“Her vision and commitment to be a prophetic voice throughout the organization, combined with her strong governance and sponsorship capabilities, are models for all of Catholic health care today,” said Bon Secours Sister Alice M. Talone, current president of the Sisters of Bon Secours, U.S.A.

Over the years, Sister Patricia has served on the Leadership Team of the Sisters of Bon Secours, USA, and in 2006, she was one of the primary leaders in creating and structuring Bon Secours Ministries as the Public Juridic Person/sponsor for Bon Secours Health System and is currently the chairperson of Bon Secours Ministries. Under Sister Patricia, the sponsoring organization for Bon Secours Health System included, for the first time, laypeople working side by side with the Sisters.
The congregation’s international offices will relocate to the United States on Dec. 1.