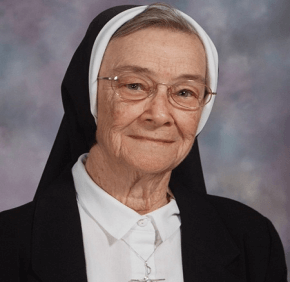 A funeral Mass for Sister Trinita Balbach of the Sisters of St. Francis of Philadelphia was offered March 18 at Assisi House in Aston, Pa. Sister Trinita died March 13. She was 91.

She also ministered in education in Florida and South Carolina.

Sister Trinita moved to Our Lady of Angels Convent in Aston, her congregation’s mother house, in 2011, and to Assisi House in 2012, where she served in prayer ministry until her death.

Sister Trinita is survived by two sisters, one of whom – Sister Helena Joseph Balbach – is also a member of the Sisters of St. Francis of Philadelphia.