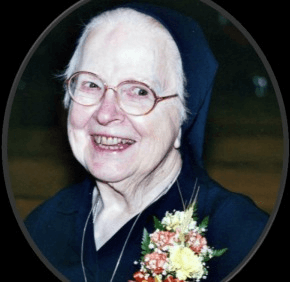 By Catholic Review Staff
A funeral Mass for Daughter of Charity of St. Vincent de Paul Sister Rosa Daly was offered July 5 at the Basilica of the National Shrine of St. Elizabeth Ann Seton in Emmitsburg. Burial followed at Sacred Heart Cemetery in Emmitsburg. Sister Rosa died July 1 at Villa St. Michael in Emmitsburg. She was 95.
A native of Washington, D.C., Sister Rosa entered the Daughters of Charity in December 1937 in Emmitsburg. She celebrated 76 years as a member of her religious order last December.
She completed coursework at St. Joseph College in Emmitsburg, Boston College and St. Louis University in St. Louis.
Sister Rosa taught at St. Martin School in Baltimore from 1940 to 1944 and then served from 1944 to 1975 at a medical center and hospitals in Connecticut, Florida, New York, Virginia and Washington, D.C.
She served as administrator and sister servant at St. Joseph Provincial House in Emmitsburg from 1975 to 1983 and then as provincial treasurer from 1983 to 1988. She served as administrator and sister servant at Villa St. Michael from 1988 to 1992.
Sister Rosa served at Sacred Heart Hospital in Cumberland from 1992 to 2004 when she was missioned to the ministry of prayer at Villa St. Michael.
She helped in the sewing room of St. Joseph House in Emmitsburg until the time of her death.
To read more obituary articles, click here.
PrevNext