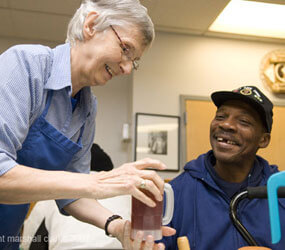 Sister Eleanor Noll was part of a small community of Benedictine sisters who relocated to Baltimore in 1971, during a time when nuns were changing not just their traditional habits but also their roles.

Here she found her calling among the city’s poor, serving for 23 years at St. Vincent de Paul of Baltimore’s Beans & Bread. She retired recently at age 76, one of the longest tenured and most respected staff members at the organization.

“Over the years, Sister Eleanor has lived the mission of St. Vincent de Paul through her work, treating all guests with dignity and respect,” said John Schiavone, executive director of St. Vincent de Paul. “She has been a key part of the program’s growth, and has developed many strong relationships with the churches and individuals in the community helping to secure the donations needed to provide a daily, delicious, well-balanced meal.”

A native of Elizabeth, N.J., Sister Eleanor was taught by Benedictines and entered the order there. Her first 20 years were spent teaching, “but after Vatican II, we felt called in other ministries,” she said. “I really wanted to work with the poor, and when I was in New Jersey I was able to do a little outreach.”

But the times, they were a changing, and along with 23 other sisters, she relocated to Baltimore.

“We were really interested in the outreach,” she recalled. “We didn’t know each other when we came down here. We all trusted each other and we developed a community. We developed a prayer life that was vibrant.”

At first she continued teaching, but then Sister Eleanor began to work at the Franciscan Center, where she eventually was invited to work with Beans & Bread.

“The Benedictine rule really stresses the gift of hospitality and the gift of welcoming the stranger,” Sister Eleanor explained. “I really felt called to help those less fortunate.”

In its early days, Beans & Bread served food to a handful of homeless people out of a row house owned by Benet Hanlon, a Benedictine priest.

“I knew I had to do the meals, and I didn’t know exactly what that entailed,” Sister Eleanor recalled with a laugh. “Now we have security and maintenance staff, but back then I was the maintenance staff – I was the one calling the plumbers and electricians.”

Beans & Bread grew and moved to Bond Street in Fells Point, adding other services such as counseling, transitional housing and off-site housing.

It was ideal work for Sister Eleanor.

One thing that didn’t change, though, was her commitment to those she served.

“They were served just as a guest would be served in the restaurant,” she said, adding that guests were offered menu choices. “It was a whole sense of inviting them to have a little peace. We really know the people.”

Sister Eleanor also praises the volunteers who helped Beans & Bread grow into an organization able to serve 300 people a day.

“We have the most wonderful volunteers,” she said.

Janice Cavanaugh has volunteered in the Beans & Bread meal program for the past 22 years.

“She has been a joy to work with,” she says of Sister Eleanor. “She is full of energy and together with her team of volunteers makes this kitchen run like clockwork. The volunteers respect her and, more importantly, the clients respect her because she shows them respect in return.”

When asked what her plans are for retirement, Sister Eleanor quipped, “I’m going to have fun, fun, fun.” She loves to garden – she has an indoor flower garden in 30 pots and an outdoor vegetable garden – and she enjoys a good book.

“What I’m doing now is slowing down and waiting for a message,” she said. “I’m just waiting for other opportunities to come along, and I’m sure they will.”