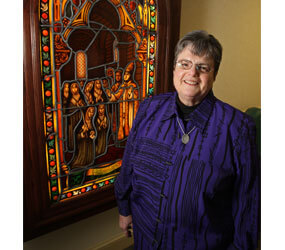 Before she entered the Sisters of Bon Secours, Sister Bernadette “Bernie” Claps had a very successful career in social work, a nice town house that she lived in for 16 years and a great network of friends and colleagues. She had reached her 50s, loved life and thought for sure she was “pretty much settled.”

But a longing she first felt in her youth kept tugging at her heart.

When she was 19, Sister Bernie had entered the Maryknoll Sisters with dreams of becoming a missionary. The young woman left during formation to care for her ill mother. She went on to earn a master’s degree in social work and found spiritual nourishment in helping others throughout a career that encompassed work in behavioral health, foster care, adoption, pastoral care, counseling, administration and more.

In recent years, as she prayed and talked with her pastor and a spiritual director, Sister Bernie felt God was calling her back to the religious life. She explored several religious congregations and found herself attracted to the Bon Secours Sisters’ charism of compassion, healing and liberation.

Sister Bernie made her first vows with the international religious community during a Nov. 7 liturgy at the Sisters of Bon Secours Chapel in Marriottsville. She calls it the happiest day of her life.

“It was a life-changing decision,” said Sister Bernie, a New York native who worked for Catholic Charities in New Jersey before joining the Bon Secours Sisters. “I realized that this was my heart’s desire and had been for so long. Once I realized that, it seemed like an easy decision. I feel this is what God is calling me to do.”

Sister Bernie has lived and ministered with the Bon Secours Sisters since 2006, using her professional skills in several ministries including outreach at the Women’s Resource Center of Bon Secours – a drop-in center for homeless and at-risk women. Sister Bernie, now in her early 60s, has also worked with the dialysis unit at Bon Secours Hospital in Baltimore and Bon Secours Senior Apartments, helping residents with support services so they can remain in their homes.

“My work assists individuals in claiming their dignity and moving toward more self-sufficiency and liberation,” she said.

For those who think they may have a call to religious life, Sister Bernie recommended finding a spiritual director, spending time in prayer and looking at a variety of religious communities.

“Don’t dismiss it, even as unexpected as it may seem,” she said. “If you feel that kind of movement in your heart, certainly look into it. You really have to trust that God is leading you in a direction that can only be good for you. God is not going to be leading us down the wrong path.”