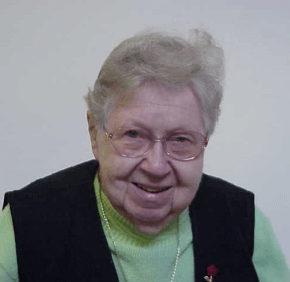 A funeral Mass for School Sister of Notre Dame Mary Rosalia Auth was offered Feb. 23 at the chapel at Villa Assumpta in Baltimore, followed by burial at Villa Maria Cemetery in Glen Arm. Sister Mary Rosalia was 99 and had been a sister for 75 years.

A native of Washington, D.C., she entered the School Sisters of Notre Dame in 1934.

She also taught in Massachusetts, Pennsylvania, Puerto Rico and Rockville.

In the 1970s, Sister Mary Rosalia was an education consultant for the Archdiocese of Baltimore serving as administrator for lay employees at the School Sister of Notre Dame’s health care facility, then in Glen Arm.

In 1984, she began serving in parish ministry at St. Benedict in Baltimore. She was the parish treasurer until 1994, when she became a volunteer at the parish.

In 2003, Sister Mary Rosalia retired to prayer and presence at Villa Assumpta in Baltimore, home of retired School Sisters of Notre Dame.

She earned a bachelor’s in history and education from College of Sacred Heart in Santurce, Puerto Rico and a master’s in education from the Catholic University of America in Washington, D.C.