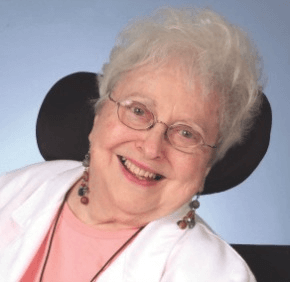 A funeral Mass for Sister of Mercy Mary Rebecca Elkins was offered May 22 at Mercy Villa. Sister Mary Rebecca died May 19. She was 90.

After five years as a nurse, Sister Mary Rebecca entered the Sisters of Mercy of the Americas in 1950. After earning a master’s degree in nursing from the University of Maryland, she spent her active years of ministry in health care, beginning in 1954 as a nurse at St. Joseph’s Infirmary in Atlanta, where she later served as associate director of nursing. She was also stationed at St. Joseph’s Hospital in Savannah and Mercy Hospital in Baltimore.

A diagnosis of multiple sclerosis cut short Sister Mary Rebecca’s active service, but she continued to help others. An accomplished artist, she taught classes for her fellow sisters, and had an extensive phone ministry.

Sister Mary Rebecca had lived at Mercy Villa since 1991, and recently moved to Stella Maris. Though her disease robbed her of more and more of her powers, she did not complain and kept a smile for all who visited or cared for her.