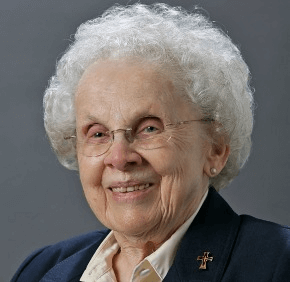 A native of Macon, Ga., Sister Helen professed her final vows in 1953. She earned a bachelor’s degree from the former Mount St. Agnes College in Baltimore in 1957 and went on to earn master’s degrees from the University of Dayton in Ohio and Forham University in New York.

Sister Helen’s assignments in the 1950s and early 1960s included teaching at the former St. Bernard’s School and the former Shrine of the Sacred Heart School, both in Baltimore. In 1963, Sister Helen returned to the latter, where she served as principal.

A member of the Sisters of Mercy for 69 years, Sister Helen also ministered in education in Georgia and Ohio.

As a teenager, she sang in the Macon USO during World War II. Throughout her life, she would break into the old songs, fitting them to present circumstances and always remembering the lyrics.