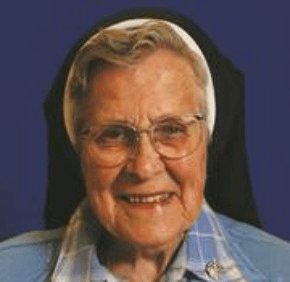 By Catholic Review Staff
A funeral Mass for School Sister of Notre Dame Marie Carl Horn was offered Sept. 1 at Villa Assumpta in Baltimore. Sister Marie Carl died Aug. 28; she was 88 and had been a professed sister for 65 years.
Born at Mercy Hospital in Baltimore on Dec. 29, 1928, she was raised at St. Mark in Catonsville, receiving the sacraments at the church and her elementary education at the parish school, where she was introduced to the School Sisters of Notre Dame.
An alumna of the Institute of Notre Dame in Baltimore, she excelled as a basketball player and served as a class officer. She graduated in 1948 and entered the School Sisters of Notre Dame that year, receiving the bonnet Aug. 28 at St. Mark.
Sister Marie Carl professed her first vows in 1951. She earned a bachelor’s degree from what is now Notre Dame of Maryland University and a master’s degree from what is now Loyola University Maryland in 1959 and 1972, respectively.
She ministered primarily in education, teaching at St. John the Evangelist School in Hydes from 1951 to 1957 and at the former St. Matthew School in Baltimore from 1966 to 1968. At the former St. Ambrose School in Baltimore, she served as superior, principal and sixth-grade teacher, from 1968 to 1971. She served as community leader and math teacher at St. John School in Westminster from 1971 to 1977.
Sister Marie Carl also ministered as a teacher and school administrator in Florida and Pennsylvania. She came to Villa Assumpta in 2000, serving as the coordinator of transportation until 2004. She also volunteered in the afterschool program at Notre Dame Preparatory School in Towson before retiring to prayer and presence in 2012.
Sports and recreation were essential to the ministry of Sister Marie Carl, who as a girl organized games for her brothers and sisters and later initiated and coached girls’ basketball programs at St. Ambrose and St. John in Westminster, as well as in Pennsylvania.
Throughout her retirement, she took daily walks and visited the sisters in Maria Health Care Center in Baltimore.