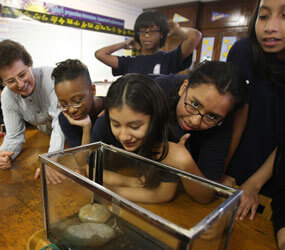 Some students at Mother Seton Academy in Baltimore have never taken a ride in the country, let alone set foot on a dairy farm.

That is, until they meet Sister Marianne Roderick, a School Sister of Notre Dame.

Sister Marianne’s roots in Frederick County date to the 1800s, when her great-great-grandparents immigrated from Germany and Ireland. Since 1965, Rodericks have owned and operated Glade Haven Farm in Walkersville, currently under the direction of her brother, David, and nephew, Joshua.

It is a Mother Seton Academy tradition for Sister Marianne’s sixth-grade homeroom, which this year numbers 15 girls and 10 boys, to make a field trip to Glade Haven in the autumn.

“Most of them have never seen a farm,” Sister Marianne said. “They get to ride on horseback, milk cows, pick apples, climb on a tractor.”

The importance of family, patience, perseverance and responsibility are preached in the classroom. What better place to reinforce those values than on a working farm?

“As a girl, I learned the value of work on my parents’ farm in Urbana,” Sister Marianne said. “My uncle’s farm was next to us, and my grandfather’s farm was across the road. There was a Rodericks Road. That environment made me what I am.”

Educated in Catholic schools in Frederick, Sister Marianne professed her vows in 1964. Well into her fifth decade as an educator, she seems as energetic as the boys and girls who bound into her classroom in Fells Point, figuratively, if not literally, as far as one can get from a Maryland farm.

In order, she taught at an orphanage in Philadelphia; was the interim principal at St. Joseph School in Taneytown; served 11 years as teacher and then principal at St. Frances in Keyser, W.Va.; and was the principal of Most Holy Name in Pittsburgh.

When her late mother took ill in the early 1990s, Sister Marianne searched for a position closer to Frederick County and a return to the classroom.

She found a new challenge at Mother Seton Academy, which, according to its Web site, is an “all-scholarship, independent Catholic middle school dedicated to the education of boys and girls from low-income families in Baltimore.”

Sister Marianne teaches math, science and religion to at-risk students, maintaining their focus with modern technology and an old-fashioned call to order when minds wander to the day’s problems at home.

“We want to work more on values, and I enjoy teaching religion class,” she said. “Many of them have not been in a church until we take them. We pray before class and read from the Bible. They like to participate in prayer services.”

Sister Marianne has been with Mother Seton Academy as it used former parish schools on Broadway and South Ann Street, and will be there when it relocates to the former St. Ann School a few miles to the north.

The urban setting is a bit of a change for a woman raised as a country girl, but the rewards are substantial, as when she hears from students who have earned degrees at the University of Oregon or are attending La Salle University’s law school.

“I love the students we have,” Sister Marianne said, “and reaching out and encouraging them to use the ability God gave them to learn and grow as a person.