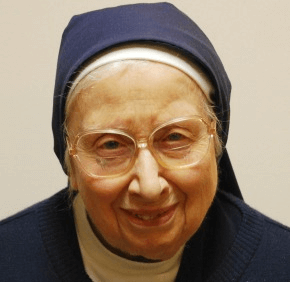 Sister Hilda Gleason died March 28. She was 102 and with the Daughters of Charity for 84 years.|

Born in Albany, N.Y., in 1914, Sister Hilda entered the Daughters of Charity in Emmitsburg in December 1932. She earned a bachelor’s degree from the former St. Joseph College in Emmitsburg and a master’s degree in education administration from Boston University.

Sister Hilda’s ministry within the Baltimore Archdiocese included teaching at the former Seton High School from 1936 to 1944, and serving as provincial councilor for the Daughters of Charity Southeast Province in Emmitsburg from 1954 to 1962.

During her tenure as councilor, she also served as president of St. Joseph College. In 1959, she welcomed then-President Dwight D. Eisenhower and his wife, Mamie Doud Eisenhower, to campus when the college awarded the latter an honorary degree.

Sister Hilda also ministered in New York, Virginia and Washington, D.C. She served at the Daughters of Charity Motherhouse in Paris starting in 1968, when she was elected English-speaking general counselor. She served as assistant to the superioress general from 1974 to 1980.  Sister Hilda then moved to Taiwan, where she had been tasked to set up a new region of the community. She served as its regional superior until 1989, and then remained in Taiwan to assume secretarial duties and teach English until 1998.

Sister Hilda returned to Emmitsburg in 1998, serving as librarian at Villa St. Michael and then entering prayer ministry.

Sister Hilda was preceded in death by her parents and siblings, including Sister Mary Gleason, also of the Daughters of Charity, who died in Bolivia in 1999.