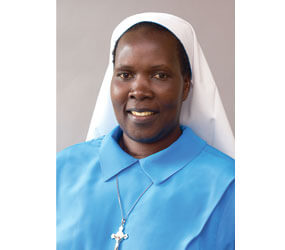 With the Middle East prominent in the news, it is easy to overlook other violent conflicts taking place across the globe. One of them is northern Uganda, where Baltimore-based Catholic Relief Services is lending a hand to those affected.

Sister Pauline Acayo, of the Little Sisters of Mary Immaculate in Gulu, Uganda, has witnessed atrocities being committed in that region due to the decades-long war between the Lord’s Resistance Army (LRA) and the Ugandan government. Sister Pauline, who began working with CRS in the mid-1990s distributing food and rebuilding roads, has since moved to development and building peace. She was in Baltimore Oct. 28, and talked about her work.

“The 22-year-war has led to displacement and poverty, and widespread HIV/AIDS, orphans, widows and destruction of infrastructure,” Sister Pauline said. “For any development to be successful, peace is essential and important.”

More than 20,000 youths have been caught up in the conflict, with the LRA abducting children from schools and villages, forcing boys to be soldiers and girls to be sex slaves. Sister Pauline works with those former LRA child rebels.

“Many of the boys were forced to kill their fellow friends by beating them or by cutting them into pieces or by shooting them,” Sister Pauline said. “Some were forced to carry or sit on dead bodies. This was all done to make them stronger.”

CRS works with the Ugandan Catholic Church and leaders in northern Uganda to reintegrate those children into society. At a reception center, children receive help recovering from the trauma they have witnessed. A reconciliation ceremony cleanses them of their atrocities.

Sister Pauline said it may take years for some to return to their former selves, as each child experiences various levels of trauma. While stressful for the child, the person working with them has to be mentally tough as well.

“As you listen to their stories, you yourself become traumatized,” she said. “You can’t believe a human being did some of these things. You have to work on yourself before you can help someone else. Working with them takes a lot of patience, persistence and perseverance.”

The community needs counseling as well, she said, in order to fully reaccept the kids. Sister Pauline said former child soldiers are harassed at school, where their schoolmates might be related to those they harmed, and perhaps even killed.

The Catholic Church advocates peace education at the schools, where former soldiers are encouraged to participate in activities such as singing and dancing to help them further open up.

“The Catholic Church has been very strong – they don’t shy away,” Sister Pauline said. “They go on the radio, hand out press releases and flyers telling about the things going on there. We’re lucky that in Uganda we have freedom of speech. That has given a lot of opportunities for our religious leaders to talk openly.”

Cross-border dialogue with political and religious leaders in nearby South Sudan and with rebel leaders provides some optimism, said Sister Pauline, who gets to see former rebels enjoy the childhood that was almost snatched from them. Since 2005, she estimates that more than 5,000 kids have been helped with the support of CRS.

“I feel so happy when the kids are happy where they’re at and when they’re doing well in their communities,” she said. “When they’re able to open up and share freely – some of them used to sit there and not talk at all. The little we’re doing, it’s bringing a bit of peace in the community and making these kids be normal human beings.”