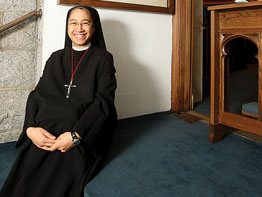 He might not text with a cell phone, but God still calls young people to vocations.

Sister Annuntiata Cornelio, C.S.M.J., a 32-year-old member of the Congregation of the Sisters of Merciful Jesus, who wears a black habit and a ready smile, is proof.

Sister Annuntiata, who was born and raised in Canada and currently serves at Holy Rosary in Fells Point, first began to think about a vocation at 14.

“It was the fruit of prayer, and I have to give a lot of credit to the Blessed Mother,” she said.

Her parents were having marital difficulties, and they sent her and her brother to live with her aunt while they worked things out. Her aunt told the worried children, “There’s only one thing you can do – pray – pray the rosary.”

“I didn’t even remember how to pray the rosary,” Sister Annuntiata said, but she learned and prayed it daily.

“It’s not like it was magic or anything, but little by little it brought healing to my family,” she said.

In the back of her mind, she kept wondering what it would be like to be a nun. She laughs as she recalls that she even put T-shirts and towels over her head, pretending she was wearing a habit.

“I didn’t think it was a calling because I had no one to walk me through it,” she said.

But that changed at World Youth Day in Denver, when people spoke openly of vocations and she glimpsed a group of nuns in brown habits and sunglasses.

Her family moved to British Columbia, where Poor Clare and Benedictine sisters were working, and she and her mom began attending daily Mass before school.

“There was a joy about them that wasn’t of this world,” she said, “and I really wanted that joy. They had something precious that the world couldn’t give.”

Her aunt gave her the “Diary of St. Marie Faustina Kowalska: Divine Mercy in My Soul,” reading that solidified her calling. “I just knew that was the congregation the Lord wanted me to join,” she said, but, not knowing what to do, she continued living the life of a high school senior.

That summer, two laywomen in Alberta started a community, modeled after St. Faustina, in a cabin. Her aunt was involved, so, under the guise of visiting her aunt, Sister Annuntiata spent the summer there to discern if she had a true calling.

“My parents had no idea I was discerning,” she said. “It was really a battle for me. Is it really God’s will, or am I making it up? By the end of those two months, I knew I had to be there.”

She broke the news – by phone – to her mother. To her surprise, her mother started crying with joy because she had been praying that if her daughter had a call, the Lord would show her the way.

“And I was so afraid to tell her,” Sister Annuntiata said. But it wasn’t so easy to talk to her father. He was the most upset she’d ever seen him, worried his daughter ultimately wouldn’t be happy.

Together, though, they drove her back to the cabin to begin life as a postulant. Meanwhile, the fledgling community had discovered the Polish order of the Congregation of the Sisters of Merciful Jesus, dedicated to worship and obtaining mercy by prayer. Despite the language barriers, the Canadians visited the order in Poland, and two Polish sisters traveled to the new community, which decided to join the Polish order.

Sister Annuntiata has been in Baltimore since August, working at Holy Rosary, where Mass-goers enjoy her mezzo-soprano contribution to the music ministry.

She likes the traditional habit her order demands, and people are drawn to it. “It’s amazing the stories that come out,” she said.

Her advice to anyone considering a vocation is to pray and find a good mentor, someone devoted to the church.

“If God is calling them, it could just start out with a little thought,” she said.

She urges parents to pray, too, but she understands their reluctance to pray for vocations if it means their son or daughter – and their dreams of grandchildren.

“Sometimes we pray for vocations, but not my child,” she says. Her old archbishop in Canada encouraged parents to pray for vocations but also to ask the Lord, “Lord if it’s your will, touch my son or my daughter.”