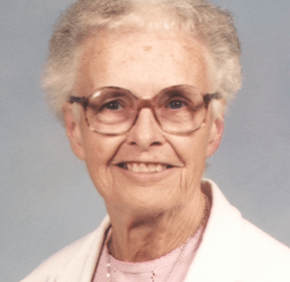 By Catholic Review Staff
A funeral Mass for Congregation of the Sisters of Providence Eleanor Pierce was offered Dec. 3 in Indiana. Sister Eleanor died Nov. 23. She was 90.
A native of Chelsea, Mass., Sister Eleanor entered the Congregation of the Sisters of Providence in 1942. She served at St. Clement I School in Lansdowne from 1960 to 1961 and was principal of the former parish school at Church of the Ascension in Halethorpe from 1965 to 1970. Her 49 years of service in education also took her to schools in New Hampshire, Massachusetts, Indiana, Illinois, Oklahoma and Washington, D.C.
In 1994 she retired from teaching but remained in her parish, St. Rose in Chelsea, Mass., ministering there, at the convent and school. In 2009 she returned to the motherhouse and committed herself to the ministry of prayer.
She earned a bachelor’s from St. Mary-of-the-Woods College in St. Mary-of-the-Woods, Ind., and a master’s from Rivier University in Nashua, N.H.
To read more obituary articles, click here.
PrevNext