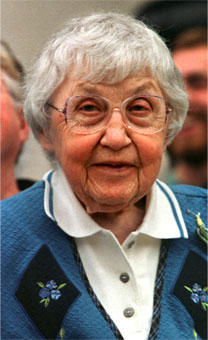 DUBUQUE, Iowa – Franciscan Sister Dorothy Marie Hennessey, a teacher turned activist who made national news at age 88 when she was sentenced to federal prison for trespassing at a Georgia military base, died Jan. 24 at the age of 94.

The stream of friends who came to Mount St. Francis Chapel for her wake and Jan. 28 funeral celebrated the influence and positive impact they said she had in their lives.

Franciscan Sister Nancy Miller noted that Sister Dorothy Marie believed prayer and politics – in the true sense – went hand in hand. She often said, “I am convinced more than ever that we should get into today’s political life with Gospel motivation.”

In 2001, Sister Dorothy Marie and her sibling, Franciscan Sister Gwen Hennessey, then 68, were sentenced, along with 24 others, to six months in the federal prison in Pekin, Ill., for trespassing at Fort Benning in Columbus, Ga., as part of the annual vigil to close the School of the Americas in November 2000.

The School of the Americas is now named the Western Hemisphere Institute for Security Cooperation; it is a combat training school for military officers from Central and South America.

Human rights workers and missionaries, including the nuns’ brother, Maryknoll Father Ron Hennessey, reported that numerous murders and human rights violations occurring in El Salvador and Guatemala were perpetrated by graduates of the school.

When a judge offered to commute Sister Dorothy Marie’s sentence to “motherhouse arrest,” she replied, “I’d rather not be singled out. If you wouldn’t mind, I would just as soon have the same (sentence) as the others.”

After several weeks, Sister Dorothy Marie was sent to complete her sentence at the Elm Street Correctional Facility in Dubuque “for health reasons.”

But that was not her first action on behalf of human rights and opposition to war – or her last.

After 30 years of teaching in Iowa and Oregon Catholic schools, Sister Dorothy Marie returned in 1964 to Mount St. Francis, where she entered the Franciscans, and for 25 years worked with Sister Rebecca Rosemeyer in the communication office, writing the community newsletter and a book chronicling the 1954-1975 years of the community’s history.

She also began using her writing skills to submit letters and guest editorials to newspapers on human rights and social justice issues, protested against the Vietnam War and served on boards of local and national organizations.

She visited Nicaragua in 1984 and 1990 as a witness for peace and as an election observer.

In 1986, she bought a one-way plane ticket to Los Angeles. When asked why she did not buy a return ticket, she replied – to the ticket agent’s astonishment – that she was walking back.

Between March 1 and Nov. 15, 1986, the then-73-year-old Sister Dorothy Marie walked 3,500 miles with 1,200 other marchers in a cross-country peace march for global nuclear disarmament.

For eight years in the 1990s, she stood with others in Dubuque’s Washington Park almost every Wednesday afternoon protesting the U.S. military involvement in Central America.

She made three trips to protest at a nuclear test site in Nevada.

“She was on a first-name basis with all of her elected officials,” he recalled. “With Dorothy, it was not enough to tell 30 people about a piece of legislation unless she was writing her own letter to her elected officials.” At 93 she got her first e-mail account to keep in touch with people with whom she marched and protested and to continue writing to legislators and candidates.

In 2002 the Hennessey sisters were awarded the Pacem in Terris Award from the Diocese of Davenport. Previous recipients included the Rev. Martin Luther King Jr. and Blessed Mother Teresa of Calcutta.