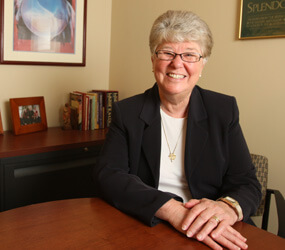 Sister Constance “Connie” Gilder, Archbishop Edwin F. O’Brien’s delegate to religious, is leaving the Archdiocese of Baltimore at the end of August to take on a leadership role with her Philadelphia-based religious community.

Sister Connie was elected to General Council of the Sisters of St. Joseph June 26 during the order’s general chapter meeting.

“Basically, the role of the leadership is to implement what the chapter has set as the priorities for the next five years,” said Sister Connie, who will work with the president and three other members of the General Council.

Addressing poverty and issues related to human trafficking are two areas where the General Council will be focusing much of its attention, Sister Connie said.

“We will be working with our partners in ministry to best have the gifts of our sisters be of service of the needs of the people,” she said. “How can we best serve people at this time when so many critical issues really cry out for justice and cry out for a global or a Gospel response?”

Sister Connie will also be responsible for helping to promote religious vocations to her order and ongoing formation.

There are about 1,000 Sisters of St. Joseph, 23 of whom minister in the Archdiocese of Baltimore.

Sister Connie served 13 months as Archbishop O’Brien’s delegate to religious, working as the liaison between religious communities and the archdiocese. She previously served five years as an assistant to Bishop Mitchell T. Rozanski in the office of the eastern vicar.

Sister Connie first came to Baltimore in 1988 to work in the office of collegial services, which later became the office of planning and counseling services. The Florida native also spent a year doing development work for the Bon Secours Spiritual Center in Marriottsville and was instrumental in developing a women’s residential program at St. Luke Institute in Silver Spring.