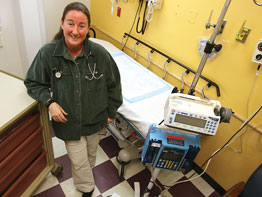 Sister Karen Schneider, R.S.M., M.D., was just a fourth-year medical student when she found herself managing a malaria outbreak in a remote village in Guyana.

She arrived at a Jesuit mission to find the priest gone and the other health-care providers stricken with the disease, which was devastating the village. The priest’s housekeeper grabbed her hand and literally dragged her to the clinic.

“The thing I will never forget is walking in, and the stench was unbelievable,” Sister Karen recalled. “It was vomit and sweat and stool and people were just laying in this stuff. I was a medical student, who came down to learn about malaria, and I didn’t have a book with me and I’m thrown into this epidemic.”

At sundown, the housekeeper tucked her into a bed covered with mosquito netting and instructed her to stay there for 12 hours to avoid mosquito bites. The next morning, Sister Karen awoke to see dugout canoes filled with sick people on stretchers making their way down river to the clinic.

But while she was there, nobody died.

“They were dying from dehydration and as a simple medical student I started IVs,” she said. “That’s when I realized there are places in the world where there are no doctors and people die from a lack of the most basic medical care.”

Today, Sister Karen teaches and practices pediatric emergency medicine at The Johns Hopkins Children’s Center in Baltimore, but four times a year, in a unique partnership between her life as a sister and her work as a medical professor, she takes pediatric residents from Hopkins to third-world countries to learn that same lesson.

With a team of volunteer nurses and one nonclinical volunteer assistant, she and the residents travel to Guyana, Peru and Haiti. This year, she added Guatemala.

Sister Karen depends on donations, most of them from her religious connections, to fund her efforts, known as the Mercy Medical Mission. Hopkins builds 10 weeks of travel into her schedule and provides the residents.

“To examine a child who is dying of malnutrition, [residents] don’t see that,” Sister Karen said. “Eighty percent of the children in the world have worms, and they don’t see that at Hopkins. It’s made a huge impression on these students, who will go on to be the leaders in pediatrics.”
It’s her hope that they, in turn, will be receptive to sending residents to far-flung countries which will make even more people aware “of that kind of poverty.”

It’s heart-breaking work. Sister Karen said they give every mother they see a month’s supply of vitamins for their children. But some mothers, whose children are suffering from malnutrition, don’t want the vitamins. When malnourished, the children don’t feel hunger pains, but when the vitamins restore the body’s vitamin and mineral balance, the children will feel hunger and cry for food – food their mothers don’t have.

Sister Karen also sees children who need simple operations, and much of her work involves partnering with in-country providers to arrange for surgery. Hernia surgery costs $300 in Haiti, an impossible fortune to destitute people.

“I’m not a surgeon,” Sister Karen said. “I beg and borrow money so that kids can have surgery.” In Guyana, she turns to Sister Sheila Walsh, R.S.M., CEO of St. Joseph-Mercy Hospital, which has provided more than 70 children with cleft palate surgery.

Daniel M. Park, R.N., a pediatric nurse at Hopkins, volunteered with Sister Karen on a trip to Haiti.

“Seeing a Third-World country up close and personal was unbelievable,” he said. “It made me grateful to be in America.” Despite being shocked by the poverty, he found it to be a wonderful experience. He had to be careful, he said, not to become jaded when he returned to Hopkins to hear patients complain about having to wait.

Sister Karen knows how that juxtaposition of worlds feels. “When I come into Miami, I say ‘Here’s Starbucks’ and I’m in 2007. When I go in to the interior, I’m back in the 14th century,” she said.

A Long Island native, Sister Karen decided to enter the order in her senior year of college. After graduation, she taught math in Brooklyn for eight years.

“I loved it, but I knew I couldn’t do it for 40 years,” she said. “I had always wanted to be a physician.” With the blessing of her order, she entered Yale Medical School, and then completed a pediatric emergency medicine fellowship at Hopkins.

“I feel very blessed I’ve been able to get the training to serve,” she said. “I fulfill my mission in all these trips. I’ve had some of the most blessed experiences. The people minister to me as much as I minister to them.”

She tells of meeting a pregnant woman with three small children, two of whom were naked. She was leaving the sugar-cane fields where she had worked, and Sister Karen wanted to buy a piece of sugar cane from her to give to the residents, who hadn’t tasted it.

“The woman gave it to me and said, ‘This is for you; I don’t want your money. You come to my country to help my children, so this is for you.’ She wouldn’t take any money.” In return Sister Karen examined her malnourished children and gave her vitamins.

“You walk away from that, and I said, ‘How does that not relate to the Gospel?’ It’s the widow’s mite – she gave all she had. That wouldn’t happen in the United States. I get more than I give.”