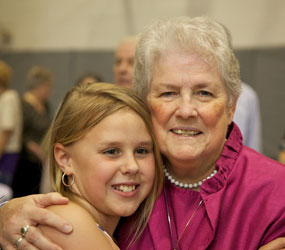 When Sister of Mercy Anne O’Donnell was assigned to St. Joseph School in Cockeysville in 1971 as a teacher, she never believed she would spend 40 years there, 39 of which were as principal.

“No way,” she said. “I was so happy in those years that I thought, ‘Gee, this is a great place, the parents are wonderful, the children are beautiful.’ I thought, ‘Well, we’ll see what happens.’ So, I took it year by year. It was very challenging, very satisfying and in my estimation, I love children and it’s all about the children.”

Sister Anne has made the difficult decision to retire as principal at the end of the school year.

“Retirement was never in my vocabulary until this year,” Sister Anne said. “I thought about it and thought about it. I’m very much at peace with it. I think God is calling me in another direction and I just have to be open to the spirit now.”

St. Joseph parish showed its appreciation May 22 in a farewell Mass that was overflowing with people.

Eighty Sisters of Mercy have taught at St. Joseph since 1926. Sister Anne is one of 14 Mercy Sisters to serve as principal of the school. Two others beside Sister Anne remain there now. There were eight when Sister Anne arrived.

Sister Anne was the last Mercy Sister to be elementary school principal in the Archdiocese of Baltimore.

“I’m just going to take at least three months to reflect, to rest and relax,” Sister Anne said. “After that, I intend to do some volunteer work and make a commitment to something.”

The Washington, D.C. native played basketball for a national championship team at Holy Trinity High School. It was then that she began to love working with children.

The Washington, D.C., native entered the Mercy Sisters upon high school graduation in 1953 and took her final vows Aug. 16, 1959, surrounded by her family.

“I’ve never regretted it,” Sister Anne said of entering the order. “I love the Sisters of Mercy. They’ve been just absolutely wonderful to me.”

She was attracted to the order’s charism, started by the Venerable Mother Catherine McAuley, of helping children and the poor.

Her mission was accomplished at St. Joseph, which participated in many outreaches.

“These children know what it is to be of service to others,” Sister Anne.

Throughout the years, St. Joseph has expanded and now has three sections. When a multi-purpose room was opened in 1999, Sister Anne was the first to throw a basketball through the hoop.

A kindergarten was started during her tenure and the school now has 350 students.

Tooma said Sister Anne always communicated a deep sense of faith and a love of the Eucharist. When Sister Anne addressed the parish and school community during the farewell Mass, she reminded them to cherish the Eucharist and Mass.

“She put all the children in the multi-purpose room and we prayed,” Schaub said. “The calming effect that had on the adults, as well as the children, was amazing.”

The school community nearly lost Sister Anne when she had a heart attack in 1995. She then had a five-way bypass surgery. The school faced life without Sister Anne.

“It was something very devastating to the community,” Schaub said. “It was kind of an eye-opener that this person who you thought was indestructible was vulnerable.”

A healthy Sister Anne returned, convinced God wanted her to continue. Sixteen years later, she is ready to say goodbye.

Monsignor Paul G. Cook, pastor of St. Joseph, has been at the parish for 34 years. The partnership between Monsignor Cook and Sister Anne was one built on trust, communication and support.

“Through 40 years, she has showed her love for God in loyalty and in service to our parish and her Mercy community,” Monsignor Cook said. “She has said so many times in her vocation, ‘I have been blessed,’ and to this, we can only add, ‘Sister, you have been a blessing to us.’”

Concluding his homily, Monsignor Cook thanked Sister Anne for her service. The congregation stood and applauded the principal.

Sister Anne spoke to St. Joseph’s community at the close of Mass. People wiped away tears as she expressed appreciation.