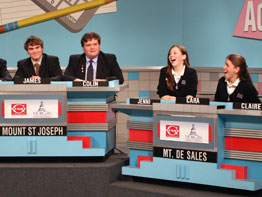 It was going to be quite a challenge for 16-year-old Cara Paul, a junior at Mount de Sales Academy, Catonsville. She was getting ready to compete in the country’s longest running TV game show, “It’s Academic,” to be taped at Baltimore’s WJZ-TV.

But it wasn’t only that she and her two fellow juniors were to face some very stiff competition from Mount St. Joseph, Irvington, and Oakland Mills high schools. Her older brother, 18-year-old James Paul, a senior, was to be the captain of the Mount St. Joe’s team.

The Paul siblings, parishioners of St. William of York, Baltimore, were about to make “It’s Academic” history. It would be the first time in the 47 years of the quiz show that a brother and sister competed against one another.

“We’ve had brothers and sisters on the same team before,” said the program’s associate producer, Joel Kemelhor, “but never siblings on opposing teams. This is quite a moment.”

Friends, family members and other students from the three schools gathered in the lobby of the television station, including James and Cara’s parents, Jeanne and Frank Paul. Mrs. Paul held a sign which proclaimed, “Go Gaels,” for Mount St. Joe’s, but on the other side, it read, “Go Sailors,” for Mount de Sales. Her husband’s card, however, read, only, “Go Mount go,” an encouraging sign of support for both schools.

As the team members seated themselves in the station’s conference room for the preparatory talk and program explanation from Mr. Kemelhor, James confessed that during the week preceding the taping, there had been quite a bit of “trash talking” between him and his sister. He looked across the table at Cara, Mount de Sales’ captain, and grinned. She ignored him, turning to giggle a little with her two teammates, juniors Jenni Doty and Claire Baldi.

Finally, the student contestants and the audience were ushered into the studio and onto the set, unchanged for more than 30 years, to meet the show’s host, David Zahern. The audience of some 60 supporters was abuzz, clapping and cheering on cue when the cameras’ red lights went on and Mr. Zahern energetically introduced the program and the three schools.

One by one, each student rose to introduce himself or herself to the viewing audience. When it came to James, he turned to where Cara was sitting and said, straight-faced, “I want to thank my sister for coming out to support us today.”

Cara responded: “I’d like to thank my brother for having faith in me.” It was the last of the teasing, “trash talk.”

The questions – ranging from mythology to tough math problems – and the answers came fast and furiously as the teams vied to press the answer buzzer first. All three teams started well. The girls from Mount de Sales were more than holding their own. But soon, Mount St. Joe’s snuck into the lead and, missing a couple of difficult questions, Mount de Sales slipped back a little. Oakland Mills was keeping it close.

By the time the academic dust had cleared, Mount St. Joe’s had clung tenaciously to its slim lead. James Paul and his teammates, Colin Leach and Sam Read, were declared the winners, and as the audience cheered appreciatively, Mrs. Paul diplomatically turned over her placard to the Mount St. Joe’s side.

As the contestants and their supporters mingled outside, there was no sign of gloating from James Paul. He smiled at his sister and said, “It’s all about conciliation now.” But, he was quick to add, “I’m glad we won.”

“I’m a little disappointed,” his sister said, “but we really didn’t expect to win.”

“They were great,” said James graciously. “And they have next year.”

James, who was a member of the Baltimore Archdiocesan Youth Advisory team last year and who is active in a leadership role with St. William of York’s youth ministry program, will return to WJZ next month for the taping of the semi-finals.

“It was a lot of fun,” said Cara, who is very active in Mount de Sales’ French and ecology clubs, “and I can’t wait for next year.”

Meanwhile the quiz heroics of James and Cara will air on WJZ-TV May 24 at 10 a.m.

“It’s Academic” was created by Sophie Altman, who still produces the quiz shows in Washington. The program features three local high school teams of three players each competing for scholarship money. Over the years Giant Food has been the sponsor, and more than $2,000,000 has been given out for school scholarship funds.

The single elimination tournament features 81 schools. The winners in each region (Baltimore, D.C. Metro and Virginia) go on to battle each other in the Super Bowl. The record-high score of 935 is held by Centennial High School in Ellicott City, a feat it achieved in 2000.