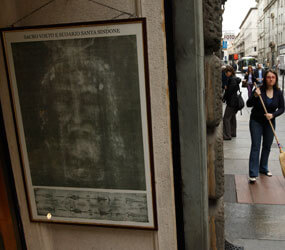 TURIN, Italy – The Shroud of Turin, believed by many to be Christ’s burial cloth, offers Christians a way to contemplate God’s face and reflect on the meaning of Christian suffering, said an expert on sacred art.

Monsignor Timothy Verdon said the authenticity of the shroud is not an official teaching of the church, but it can be a “useful incentive for prayer and reflection.”

Monsignor Verdon, an American who serves as director of the Office for Catechesis through Art of the Archdiocese of Florence, was in Turin April 25 to talk about the role of art in Christian history and the significance of the shroud.

Speaking to Catholic News Service, he said that whether one accepts the shroud as Christ’s burial cloth, “it is undoubtedly the burial cloth of a man who was tortured and leads one to focus on human suffering, to open one’s heart to the meaning of suffering.”

In his talk to pilgrims at Turin’s St. John the Baptist Cathedral, where the shroud is currently on display, Monsignor Verdon said the desire to see the face of God was always a driving instinct in the Judeo-Christian world, but until Christ was born it was impossible.

“Christ said, ‘He who sees me sees the one who sent me, sees God,’“ he reminded pilgrims.

This is even more important in a post-Christian world that often rejects Christ and anything linked to him, he said.

Referring to recent decisions in various European countries to ban the crucifix from public places, Monsignor Verdon said that by rejecting Christ and any images linked to him, people in Europe risk losing their Judeo-Christian identity.

The shroud can serve to counteract that because, “in the body and face of Christ, people meditate on themselves. We meditate on where we’ve been and where we’re going as Christians.”

At the request of the Archdiocese of Turin, Monsignor Verdon organized an exhibit at Turin’s Royal Palace gallery illustrating how artists have sought to depict Christ throughout the ages.

The shroud was on display in Turin’s cathedral until May 23. Normally displayed during jubilee years, its previous public exhibition was in 2000 and the next was to have been in 2025. The Turin Archdiocese, however, drew up a pastoral plan that asks the faithful to focus on the passion of Christ in 2010, and so asked for special permission to display the shroud as part of the activities for the year.

Pope Benedict XVI was scheduled to make a one-day visit to Turin May 2 to venerate the shroud. Pope Benedict was to also celebrate Mass with the faithful, meet with youth, and visit a local home for disabled people.