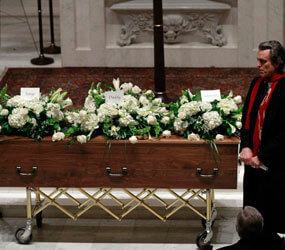 POTOMAC – Robert Sargent Shriver Jr. was “a man for this age,” whose faith shaped his work on behalf of the poor around the world and his work in defending the dignity of all human life, said Washington Cardinal Donald W. Wuerl at the Jan. 22 funeral Mass for the founding director of the Peace Corps.

Shriver – also a key architect of anti-poverty programs such as Head Start, VISTA, the Job Corps and Upward Bound – died Jan. 18 at the age of 95, and he had been suffering in recent years from Alzheimer’s disease.

“The life of Robert Sargent Shriver was not just one of accomplishment as husband, father, friend, public servant and founder. The life of Sargent Shriver was a testimony to belief in God and how faith must engage the world,” Cardinal Wuerl said in his homily at the Mass at Our Lady of Mercy Church in Potomac that was attended by a standing-room-only crowd of nearly 1,000 people.

The congregation included first lady Michelle Obama and talk show host Oprah Winfrey, and tributes were offered by the five children of the late Sargent and Eunice Kennedy Shriver, the founder of the Special Olympics who died in 2009; and by Vice President Joe Biden and former President Bill Clinton.

The Mass at Our Lady of Mercy had special poignancy, because the Shrivers faithfully attended daily Mass there over the years.

“Sargent Shriver was a man for this age. He perceived and addressed some of our deepest challenges before many fully understood the problems. His passion for truth flowed from his knowledge of Jesus who is the way, the truth and life. He is buried holding in his hands the rosary he prayed every day,” the cardinal said.

Cardinal Wuerl praised Shriver as a man who fought “injustice and poverty his whole life. … Much will be written about his war on poverty. Around the world, lives were changed by the Peace Corps not only in the people who were served but, most importantly, in the hearts of young Americans who gathered more from his vision than they ever could sow.”

In 1961, President John F. Kennedy appointed Sargent Shriver, his brother-in-law, to be the first director of the Peace Corps, and Shriver built up the agency with the organizational skill, faith, determination and joyful spirit for which he was known, his former colleagues said in the days after his death. Over the past 50 years, more than 200,000 young Americans have volunteered with the agency, serving as teachers, doctors, engineers and other development experts in 139 host countries around the world.

Shriver’s faith and love for God shaped his public service, Cardinal Wuerl said. “As a believer, Sargent Shriver was convinced that our hope for a better world is rooted in our faith that God will help us make this happen. Faith was the source of his perennial optimism and his social activism.”

Washington’s archbishop also praised Shriver for his work with his wife in developing the Special Olympics into a worldwide movement that began as a camp in the backyard of their Maryland home, for youth with special needs. “Today so many children with special needs have a chance to run and bowl and swim and play and laugh,” the cardinal said. “He believed every life has value, is beautiful and should be respected, cherished, protected.”

Before the Mass, two Special Olympians served as ushers in the center aisle of the church, handing out programs. Frank Stephens, one of those ushers, has Down syndrome. Remembering his friend, Sargent Shriver, he said, “I always liked his charming smile.”

Stephens expressed gratitude for what Sargent and Eunice Shriver had achieved in building the Special Olympics, and he said competing in those games was an experience where he learned, “not only can we do our best, even if we don’t win, we’re always brave in the attempt.”

At the Mass, U2’s Bono sang St. Francis of Assisi’s peace prayer, “Make Me a Channel of Your Peace,” and actress and singer Vanessa Williams sang, “Soon and Very Soon, We Are Going to See the King.” Wyclef Jean sang Psalm 98.

Opera singer Harolyn Blackwell, who grew up in Sacred Heart Parish in Washington, sang “Pie Jesu” and “Ave Maria,” and Irish singer and musician Glen Hansard led a postlude performance of “Forever Young,” accompanied by Stevie Wonder on the harmonica.

Cardinal Wuerl concluded his homily by encouraging the 19 Shriver grandchildren to remember the example of their grandfather. “You are his heirs. Your grandfather has left you an extraordinary legacy. You may have only known your grandfather in his later years. Make sure you take the time to study his life and let his faith be a model for your own,” the cardinal said.

He also praised Shriver as a man “who recognized his primary vocation was husband and father. Sarge’s knowledge of God’s love as experienced in his practice of the faith and lived in the love of his family was the structure that supported his public life. From this faith, hope and love flowed his thirst for justice and peace and the courage to speak for those who had no voice.”

Maria Shriver – the former first lady of California and an award-winning journalist and author – said “Sarge’s kids” were proud to have shared their father with his extended family of friends and colleagues who worked with him to bring help and hope to others.

Her husband, Arnold Schwarzenegger, the actor and former governor of California, served as a pallbearer at the funeral, along with the four Shriver sons and older grandsons.