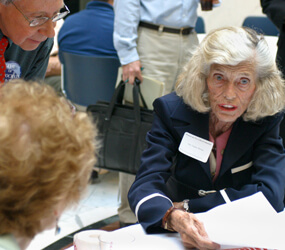 BARNSTABLE, Mass. – Special Olympics founder Eunice Kennedy Shriver, who died Aug. 11, was “a woman of ardent faith and generous public service” in her work with the developmentally and physically disabled, said Archbishop Pietro Sambi, apostolic nuncio to the United States.

In a letter to Shriver’s family released to the press and posted on the Special Olympics Web site, the archbishop conveyed the condolences of Pope Benedict XVI.

He said the pope “unites himself spiritually with each of you at this difficult time, holding close to his heart Eunice as she is called home to eternal life and trusting in the words of sacred Scripture: ‘What will separate us from the love of Christ?’”

News reports said the 88-year-old Shriver, sister of the late President John F. Kennedy, died in a hospital in Barnstable, on Cape Cod. At her side were her husband, R. Sargent Shriver, the couple’s five children and their spouses, and the Shrivers’ 19 grandchildren. She had been in failing health after suffering a couple of strokes in recent years and was hospitalized several days before her death.

The Boston Globe reported that a public wake for Shriver was to be held Aug. 13 at Our Lady of Victory Church in Centerville. A private funeral Mass was to be celebrated Aug. 14 at St. Francis Xavier Church in Hyannis.

According to the Shriver family, areas where people could pay tribute to her were being set up at the Special Olympics headquarters in Washington, the John F. Kennedy Presidential Library and Museum in Boston, and the Kennedy museum in Hyannis.

A statement from the family said she was the light of their lives as mother, wife, grandmother, sister and aunt “who taught us by example and with passion what it means to live a faith-driven life of love and service to others.”

It noted her deep devotion to Mary. “May she be welcomed now by Mary to the joy and love of life everlasting in the certain truth that her love and spirit will live forever,” it said.

President Barack Obama called Shriver “an extraordinary woman who, as much as anyone, taught our nation – and our world – that no physical or mental barrier can restrain the power of the human spirit.”

Special Olympics president and chief operating officer Brady Lum thanked the public for such an “extreme outpouring of support and prayer” for Shriver, whom he praised for having “the vision to create our movement.” Her death is “an enormous loss” but “her legacy will live on,” he added.

Cardinal William H. Keeler, Archbishop Emeritus of Baltimore, recalled in a statement two instances in which Shriver was his guest in Baltimore.

She “left a remarkable record for the world to see,” Cardinal Keeler said. “As a founder of the Special Olympics, she brought recognition to the most neglected of people, those with mental disabilities. … I shall offer Mass for her repose in the Lord.”

In a letter to the Shrivers’ daughter, Maria, who is the wife of California Gov. Arnold Schwarzenegger, Los Angeles Cardinal Roger L. Mahony said her mother’s “extraordinary commitment to living out the Gospel values was an inspiration and source of strength for all whose lives she touched.”

“Her faith and generous spirit motivated her to reach out in love to make our society more aware of the dignity and gifts of all people, especially the mentally handicapped, the poor and the marginalized,” he wrote.

Eunice Kennedy Shriver was a member of one of the most prominent American Catholic political families of the 20th century. Born in Brookline, Mass., July 10, 1921, she was the fifth of nine children of Joseph P. Kennedy and Rose Fitzgerald Kennedy.

Her brother the president was assassinated in 1963 and another brother, Sen. Robert F. Kennedy, was gunned down in 1968 as he campaigned for the presidency that year. Her youngest brother, Sen. Edward Kennedy, has served in the U.S. Senate since he was first elected in 1962 to fill his brother John’s unexpired term after he became president. Since May 2008 he has been battling a brain tumor.

She and her husband had been married since 1953. R. Sargent Shriver was the first director of the Peace Corps, an initiative established during the Kennedy administration that still sends thousands of Americans each year to underdeveloped nations to help lift people out of disease and poverty.

In 1968 she organized the first Special Olympics. She was inspired to help the developmentally disabled achieve in life by what her older sister, Rosemary, endured. She was born with a mild form of developmental disability, but a frontal lobotomy when she was 23 years old further reduced her mental capacity. She died in 2005.

In 1976 Eunice Kennedy Shriver, in an essay written for a Catholic magazine, called for a comprehensive “bill of rights” for developmentally disabled Americans because those rights “are under attack all over the nation.”

Shriver was a catalyst in getting a religious education program for developmentally disabled adults launched in the mid-1990s. When catechists met with Shriver and told her of their years of wishing that they had such a curriculum, she helped them secure the grant funds and told them, “Now make it a reality.”

In 1990 she shepherded the development of a values education curriculum, “Growing Up Caring,” with lessons to help adolescents learn to care about themselves and others, and to say no to sex, drugs and other pressures.

In 1972, a year before Supreme Court rulings legalized abortion throughout the United States, she told a Birthright convention in New Jersey that if women opposed to abortion took in unwanted infants for three years until foster homes could be found, there would be fewer abortions. Later that year, she proposed a campaign called “One Million for Life” to recruit 1 million people willing to adopt unwanted children.

In 1975 she called for the establishment of “life support centers” offering comprehensive services to those who want to save life, encourage motherhood and support the family.

In a 1977 statement written for Catholic News Service’s predecessor, NC News Service, as Congress debated a ban on federal funding of abortion, she asked: “How do you equate the life of an unborn infant with the social well-being of a mother, a father or a family? If it is thought that the social well-being of the mother outweighs the rights of fetuses with congenital abnormalities, we do well to remember that more than 99 percent of abortions are done on normal fetuses.”

He pro-life stances earned her an award from Feminists for Life in 2000, just one of many honors and awards she received over the years. In 1989 she received the James Cardinal Gibbons Award from The Catholic University of America in Washington. She won the James Keller Award from the Christophers, given to individuals for their work with young people, in 1990, as well as the Catholic Theological Union in Chicago’s Distinguished Service Award.

She received the Presidential Medal of Freedom, the nation’s highest civilian honor, from President Ronald Reagan in 1984. In 1988 she received the Laetare Medal, the highest honor given by the University of Notre Dame in Indiana.

In 2006, Pope Benedict bestowed upon her the title of dame of the papal order of St. Gregory the Great.

Shriver, who had a bachelor of arts degree from Stanford University in California, received numerous honorary degrees over the years, including ones from Boston College in 1990, St. Mary’s College in Notre Dame, Ind., in 1987 and Loyola College in Baltimore in 1994.

She was one of the early major contributors to Support Our Aging Religious, which has aimed to reduce the unfunded retirement liability of U.S. religious orders.