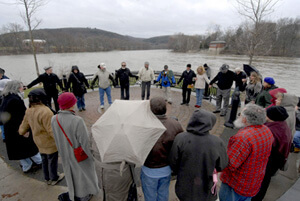 BINGHAMTON, N.Y. – The 14 people who died April 3 in the shooting at the American Civic Association – and the dozens who escaped – reflected the city’s immigrant past and present, as has the outpouring of support and grief from the region, according to area priests and others.

As word of events at the immigrant services center spread that Friday, Buddhist, Muslim, Jewish, Catholic and Protestant religious leaders flocked to a Catholic Charities office nearby to provide support for anxious relatives and friends of people who were believed to be inside the agency.

While police tried to understand what was happening at the center, counselors, clergy, translators and others gathered at Catholic Charities, said staff member Marsha Maroney.

She told Catholic News Service April 6 that dozens of counselors and others with social service skills would be on hand at Catholic Charities for as long as people needed assistance in coping with the worst crime Binghamton-area residents could recall happening in their community.

Police said Jiverly A. Wong, 41, barricaded an exit route at the center with his car, then killed 13 people including an English teacher and a dozen students. He shot and wounded four others before taking his own life, they said.

“This was by far the worst tragedy ever experienced in this area,” said Father Corey Van Kuren, a native of nearby Johnson City.

He told CNS he was at the center of events because he is chaplain to Binghamton’s fire department, chaplain at one of the hospitals where victims were brought, and serves at the Newman Center of Binghamton University, adjacent to the site of the shooting.

Father Van Kuren said April 6 that those killed and those who survived reflected Binghamton’s immigrant history. The victims included a U.S.-born teacher, a part-time staff member from Ukraine and students from Vietnam, Haiti, Pakistan, Brazil, Iraq, the Philippines and China.

He described Binghamton as being “in a lull” as the community settled back to daily life.

“It’s quite apropos that this would be in Holy Week,” he said, likening the process of coping with the violence to events Christians commemorate in Holy Week and Easter. “We have to go into the tomb to come out of the tomb. Right now we’re in the tomb waiting for Resurrection.”

With Passover beginning April 8, the week’s religious observances were to include an April 8 interfaith prayer service. Two Muslim victims were buried over the April 4-5 weekend; and other funerals were expected during the week.

An estimated 1,000 people gathered for an interfaith vigil April 5 at a middle school about a mile from the site of the shootings.

The Rev. Douglas Taylor of the Unitarian Universalist Church prayed: “Oh God, grant us the courage to reject vengeance, the courage to choose to heal what is broken and to redeem what cannot be healed.”

He also prayed the community “will be known” not by the loss or the violence, but by its “loving response.”

Father John Putano, vicar for the southern region of the Syracuse Diocese, joined in praying for courage, strength and love for all affected by the shooting.

“Relieve the suffering of the wounded, the families and friends of victims who died and those who survive,” Father Putano prayed. “Grant them peace of mind and a renewed faith and your protection. Protect us from the violence of others. Keep us safe from the weapons of hate and restore to us tranquillity and peace.”

The names of the victims were flashed on a screen; 14 flower arrangements represented those who died.

Father Van Kuren said the strong religious faith exhibited by the families and friends of the victims was inspiring.

Many immigrants, like the students who were at the center to take English classes and other clients there, tend to be more religiously observant than nonimmigrants, he noted. “And they’re also more communal.”

One New York newspaper told of Phuong Nguyen, a Vietnamese immigrant who was in a basement classroom for English class while Wong was shooting people upstairs.

“I prayed the rosary about two or three times,” she told the Post-Standard of Syracuse.

“It’s a good lesson for us,” said Father Van Kuren. “Religion is one of the few things that lets them be a part of a community here.”

The Post-Standard also had an article about Shirley DeLucia, who worked at the center and was shot in the abdomen. She pretended to be dead, then managed to call the police.

The newspaper said she told her parish priest who visited her in the hospital that she was sure God gave her the strength to act.

Contributing to the story were Deacon Tom Picciano in Binghamton and Patricia Zapor in Washington.