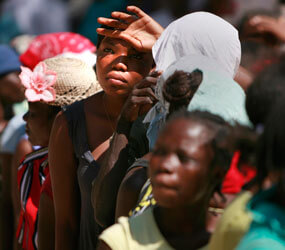 PORT-AU-PRINCE, Haiti – A pregnant Germaine Sylace struggled to get control of the two tarps, a plastic bin of nails and 100 feet of nylon rope. Nothing was going to stop her from making sure her family would be sleeping under something better than a couple of thin bed sheets tied together with string.

Sylace, 44, was trying not to drop the supplies being delivered Feb. 5 and 6 by Catholic Relief Services to thousands of families forced from their homes by January’s earthquake. She gained control and made her way down a rocky hillside at the Petionville Club path back to the small spot of land she, her husband and their three children had occupied for more than three weeks.

The new materials at least would provide better protection from the elements, she said.

“When it rains I get sick and one of my sons gets sick,” she told Catholic News Service Feb. 5. “This will keep us dry.”

The thousands of people in makeshift sheet camps throughout the Haitian capital and beyond had been fortunate that very little rain had fallen since the earthquake. But Sylace and the others know the rainy season is less than two months away, and any material that will help keep them dry is better than cloth sheets and thin blankets.

Isaac Boyd, an American-born shelter expert summoned from Kenya, where he handled crisis housing for refugees for Catholic Relief Services, said the kits are not meant to be a permanent solution for thousands of Haitians left homeless by the quake.

CRS provided up to 7,000 kits to the estimated 35,000 people at the camp. Some of the kit materials had been in storage in Dubai for just such emergencies, Boyd said. The kits were assembled in the Dominican Republic.

Boyd said CRS officials decided against providing tents to people because of a lack of space and because they hope to begin moving people to other locations as soon as possible. He said the estimate of people staying at the golf course was decreased from 50,000 after an accounting following a recent distribution of food.

Even as the kits were distributed, Boyd and CRS shelter experts were looking for alternatives to housing people on the golf course. Its hilly terrain and lack of sanitation facilities are not ideal, especially once the rains begin. CRS staffers fear the land could become a quagmire of unimaginable proportions.

“It’s no secret that this site is not really appropriate for prolonged occupation,” Boyd said. “There’s going to be a lot of runoff problems in places where you have natural gullies. So this place is going to have to be thinned out. Exactly how and when is something a lot people are talking about.

The distribution moved smoothly the morning of Feb. 5 and offered an example of how coordinated planning could reach thousands of people in a crisis situation quickly. For the most part, Haitians stood patiently in line at the bottom of a hill overlooking the golf course, under the watchful eyes of a contingent of U.S. Army soldiers from the 173rd Airborne Brigade. Although some jostling was observed, the vast majority remained calm.

Music blared from two speakers midway up the hill.

“Haiti is not destroyed,” one song reminded people “One day we will see joy.”

People such as Sylace eagerly embraced the shelter materials and hurried to their campsites to begin building a better covering for their meager belongings.

Miel James, 42, said he lost one of his seven children during the earthquake and hoped that his family’s situation improves soon.

“I’m so happy because if it was raining we could get wet” with just sheets as cover, he said after getting his supplies.

Jean Coster echoed James, saying the 10 people living in his family’s flimsy covering will be much better off now.

Boyd said the challenges facing hundreds of thousands of homeless Haitians is unlike any he has witnessed in more than six years of working in humanitarian crisis situations.

CRS meets regularly with other providers of aid – including Caritas Haiti and Caritas Internationalis, World Vision and the U.N. World Food Program – in what are called cluster meetings. The daily gatherings give representatives from the aid agencies the opportunity to discuss problems that arise, share information about growing needs in one part of the quake-affected area or another, match agencies with the expertise they offer and begin planning how to continue to address the expected shift in the needs of homeless Haitians in the months ahead.

“The next step will be some kind of transitional shelter program,” until permanent housing can be constructed, Boyd said.

Such shelters, made of more durable materials, would be simple to construct and last for up to three years. Sites in Port-au-Prince and outside of the city are being considered for such a program, Boyd said, adding it is best to get people “to neighborhoods where they once lived or where they have family.”