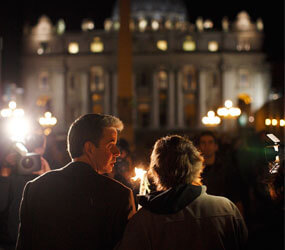 VATICAN CITY – Gary Bergeron and Paola Leerschool, who had hoped to observe a moment of silence in St. Peter’s Square with a large group of sex abuse survivors and their supporters, ended up walking to the Vatican alone, leaving letters for Pope Benedict XVI and leaving a small pile of stones to show survivors they had been there.

“The journey of a survivor is one step at a time. This is one step,” said Bergeron, a native of Massachusetts and one of the numerous youngsters abused in the 1960s and 1970s by then-Father Joseph Birmingham, who once served as a priest in the Boston Archdiocese and since has been laicized.

Even though Italian military police prevented the whole group of about 100 people – sex abuse survivors and their supporters – from walking together to St. Peter’s Square Oct. 31, Bergeron said the event “was very powerful for many of the survivors and, to me, that’s a success.”

Bernie McDaid, who also was abused by Father Birmingham, told the survivors, “My anger, your anger, our anger is justified.”

He said that while the church has enacted new norms for preventing and dealing with abuse cases, the fact that new revelations of abuse erupted again this year, shows that more must be done.

“We cannot heal until things change,” he said.

McDaid and Bergeron, founders of Survivors Voice, organized the event for Oct. 31, which many Protestants celebrate as Reformation Day, the anniversary of Martin Luther writing a letter in 1517 protesting the sale of indulgences and setting off what became the Protestant Reformation.

The two called on the United Nations to declare sex abuse a “crime against humanity.”

Bergeron told Catholic News Service, “This is not a protest. This is a gathering of people standing with survivors and in one voice saying, ‘Enough.’ ”

He said he and McDaid did not ask in advance for a meeting with anyone at the Vatican, but did ask dozens of U.S. bishops to help them get permission to hold a vigil in St. Peter’s Square. Only two of the bishops answered and both said they couldn’t help, Bergeron said.

The group did not have a permit from the Italian government to hold a public gathering, although police allowed them to give interviews, make speeches and observe their moment of silence in front of Castel Sant’Angelo down the street from St. Peter’s Square.

Jesuit Father Federico Lombardi, Vatican spokesman, went to the castle grounds to speak to McDaid and Bergeron, but left after more than 100 photographers and reporters crowded around him and after one of the Italian survivors shouted “shame.”

When the survivors’ group tried to leave the castle grounds to walk down the boulevard to St. Peter’s, a row of Italian police stopped them. In the end, a couple of police officers and dozens of journalists walked with Bergeron and Leerschool – the wife of a Dutch survivor of abuse – to the square while the rest of the survivors’ group stayed behind.

Italian police also accompanied Bergeron and Leerschool to the Bronze Doors, a Vatican entrance, where they left about 75 letters from sex abuse victims. The two said the police held their passports for about 10 minutes before returning them and escorting the two into St. Peter’s Square.
In the square, Bergeron and Leerschool left a dozen stones at the foot of the obelisk as a sign to other survivors that they had been there and were in solidarity with them, they said.

Bergeron and McDaid and six others later met with Father Lombardi.

The Jesuit said, “We spoke for almost an hour. They told me their position and their concerns.”

Father Lombardi said that when he had gone earlier to Castel Sant’Angelo he had done so to greet the organizers, but since they had not yet arrived “and there was a certain confusion,” he returned to his office at Vatican Radio after letting people know he’d be willing to meet the survivors.

Bergeron went up to his office briefly before the vigil began and Father Lombardi gave him a statement he had prepared as a sign that he and other Vatican officials were aware of the survivors’ presence.

“I know you think that the church should do more, and in a quicker way,” Father Lombardi’s statement in English said. “From my point of view – even though one may and should always do more – I am convinced that the church has done, and is doing a lot. Not only the pope, with his words and example, but many church communities in various parts of the world have done and are doing a lot, by way of listening to the victims as well as in the matter of prevention and formation,” he said.

Most of the survivors and supporters at the event were from a school for the deaf in Verona, Italy; they said dozens of priests on the staff abused students over the course of decades and were never arrested or punished in any way. Other survivors came from Ireland, the Netherlands, England and Australia.