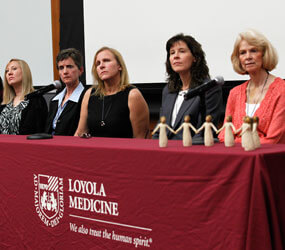 MAYWOOD, Ill. – Loyola University Medical Center is a very giving place to work – so much so that within the past year, seven female employees donated their kidneys as part of the center’s Pay-It-Forward Kidney Transplant Program.

The women, dubbed the “Seven Sisters” by Loyola, spoke to the media April 27 at Loyola University Stritch School of Medicine in Maywood.

The transplants occur locally or across the country, depending upon need. During the news conference, hospital officials said that 4,000 people in Illinois await a kidney transplant.

Speaking on behalf of all seven women, Jambrosek told the media and guests at the news conference that the women believe they are just ordinary people.

“We believe there are others like us who are willing to make a difference,” she said. Jambrosek, who is administrative director of the Graduate Medical Education Program at the medical school, donated her kidney recently and said she feels fine and has gone back to a normal routine that includes running.

There is an obvious relationship to faith in God and organ donation.

According to the Catechism of the Catholic Church, the church teaches that organ donation is a positive act.

The catechism states, “Organ transplants are in conformity with the moral law if the physical and psychological dangers and risks to the donor are proportionate to the good that is sought for the recipient. Organ donation after death is a noble and meritorious act and is to be encouraged as an expression of generous solidarity” (No. 2296).

Faith played a role in Jane Thomas’ decision to donate a kidney to a complete stranger Aug. 12, 2010.

Thomas, who is a registered nurse in Loyola’s lung transplant program, said her family grew up going to church and it was watching an extended family member go through renal failure that inspired her to give.

“I just wanted to be able to help someone else’s family not go through that pain,” she said.

Jose Luis Rosa Jr., a parishioner at St. Mark Parish in Chicago, was on hand at the conference and donated a kidney before the Pay-It-Forward program began.

Rosa, a Chicago police officer, wanted to donate to his wife but wasn’t a match so he donated to a person in California. He said it changed his life. He started praying more and became a better person, he said.

His wife received a kidney donation and is doing fine today. Rosa praised the Pay-It-Forward Program as a way to help many people all over the world.

“This is going to open a lot of doors for a lot of people,” he said.