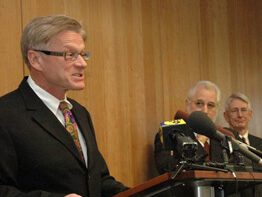 Both sides agree to $75 million plan to pay

PORTLAND, Ore. (CNS) — The Archdiocese of Portland will not need to sell off parish or school property under terms of a $75 million settlement between the archdiocese and almost 150 sex abuse claimants.

The more than 100-page settlement plan was filed in U.S. Bankruptcy Court in Portland Dec. 18, a week after U.S. District Judge Michael Hogan stood with church officials and victims’ lawyers in a federal courthouse in Eugene to say the claims had been settled after more than three months of arduous private negotiations.

Among the resolved cases is the $135 million suit that in 2004 pushed the archdiocese to become the first Catholic archdiocese or diocese in the nation to file for bankruptcy. At one point last year, abuse suits against the Archdiocese of Portland added up to more than $500 million.

“We do not anticipate any parish property or school property to be liquidated or contributed or collateralized to fund the joint plan,” said the judge, calling that result “the good news” of the day.

Agreements reached with the archdiocese’s insurers will bring more than $50 million to the settlement. Nonparish and nonschool real estate is likely to be sold to help pay the rest, Hogan said.

Under terms of the settlement, the archdiocese also will set aside an additional $20 million to pay sex abuse victims who missed the deadline for the settlement plan and those who might be victims in the future.

Lawyers for the claimants and the church are still under a gag order placed by Hogan and the other federally appointed mediator, Oregon Circuit Judge Lyle Velure. Hogan recently said the gag order remains in place until the plan is finalized, probably in the spring.

The plan is subject to approval by creditors, including clergy sex abuse victims, to whom the archdiocese owes money.

The proposed plan calls for a new corporate structure for the Catholic Church in western Oregon, with parishes and schools set up as legal charitable entities separate from the archdiocese.

Lawyers for abuse victims had insisted that the archdiocese owns schools and parishes. That would have made much more money available for claims.

But from the onset, Portland Archbishop John G. Vlazny and other church leaders pointed to church law, which holds that parishes and schools own their assets. Any parish or school funds held by the archdiocese are held in trust, church officials said.

Hogan thanked lawyers from both sides for “prodigious and cooperative efforts” in a mediation process he called “rough and ready.”

The archdiocese’s legal and professional bills for the bankruptcy case have already reached about $16 million. An earlier round of mediation fell apart last year. The current talks began in August and took hundreds of hours.

“Some problems are difficult enough and complicated enough that the parties should not miss the chance to try to find a resolution in this way,” said Hogan. “Some people say complicated cases are tougher. I don’t think so. I think they call out for this sort of mediation process.”

The interests of western Oregon’s 400,000 Catholics were an important part of the mediation, Hogan said, along with interests of the archdiocese, insurers and victims.

“These settlements were all voluntary,” Hogan said. “That doesn’t mean more healing time is not necessary in this very difficult situation.”

The archdiocese will continue to meet with claimants and in some cases offer to pay for counseling. The settlement calls for a prayer service that will include thanksgiving for the resolution and for all people involved, including victims and their attorneys.