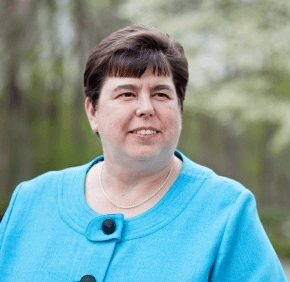 By Elizabeth Lowe
elowe@CatholicReview.org
LUTHERVILLE – Donna Bridickas, the product of an all-girls’ Catholic high school, champions single-gender education.
“I’ve dedicated my life to giving back to the community in that way,” said Bridickas, who has spent 23 of her 30 years in Catholic education in all-female institutions.
Bridickas, 52, will continue serving at an all-girls’ school in the Archdiocese of Baltimore, as she has been named the next president of The Seton Keough High School, effective July 1. The announcement was made April 23.
Since 1999, Bridickas has been the principal and dean of academics at Maryvale Preparatory School in Lutherville, where she teaches a morality class to juniors.
Previously, she had served as science department chairwoman, and then vice principal of student personnel, at her alma mater, The Catholic High School of Baltimore, from 1991 to 1999. She is a 1979 graduate of the school.
From 1984 to 1991 Bridickas taught at Father Charles A. Hall School and St. Anthony of Padua School, both in Baltimore, as well as at schools in South Carolina and West Virginia.
She earned a bachelor’s in natural sciences and mathematics from Towson University and a master’s of education from Loyola University Maryland in Baltimore.
“As a young child I wanted to be a teacher,” said Bridickas, who attended the former parish school of the Shrine of St. Alphonsus in Baltimore. “That’s where I felt God was calling me.”
Bridickas said that Sister of St. Francis of Philadelphia M. Ellen Eugene Callaghan, a science teacher she had at Catholic High, instilled in her a love for the subject and was a caring educator.
“She was kind and compassionate, she was a role model,” Bridickas said. “Our role as Catholic educators is to bring the message of Jesus to our young people, to help them make moral decisions and become leaders.”
As Seton Keough’s new leader, Bridickas’ tasks will include managing the budget, attracting new donors and increasing enrollment. She is transitioning from Maryvale, with 364 students in grades 6-12, to Seton Keough, which currently has 268 students.
“It’s important the leader sets a vision and articulates that to the community,” said Bridickas, who describes herself as a collaborative leader. “It’s important for me to listen.”
She wants to provide Seton Keough with stability. The Baltimore school has not had a president since the 2011-12 school year.
Hiring Bridickas signifies “that we’re going to have the support that we need to continue our viability,” said Angela Calamari, principal of Seton Keough. “We’ve been praying very hard that we will get someone.”
Tracey Ford, president of Maryvale since July 2012, described Bridickas as an exceptional leader.
“I never worried about anything that had to do with running the school because I had Donna there,” Ford said. “She is 100 percent committed to Catholic education, that’s most important. She will want them (Seton Keough) to get stronger, not remain in place. She will bring not only stability, but forward thinking.”
Jessica Vitrano Randisi, a 2001 graduate of Maryvale and its varsity lacrosse coach and an English and theater teacher, said Bridickas is cut out for her new role.
“She’s always been in Catholic schools,” Randisi said. “It’s natural for her, it’s the next step.
“They (Seton Keough) are going to see someone who is fair, someone who is looking out for the students as well as them (the community),” Randisi said, “and someone who is going to give it everything she has.”
Also see:
Notre Dame of Maryland University names Yam its 14th president
Bishop Madden tours Washington Monument
Archbishop Lori dedicates new church for 200-year-old Buckeystown parish
PrevNext