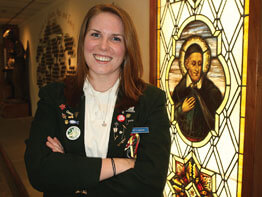 When Beth Amann took the stage as Dorothy Gale in “The Wizard of Oz” three years ago at The Seton Keough High School, she was a freshman looking for a niche.

As the curtain fell and applause rang out, she realized there truly was “no place like home.”

“I think I knew then,” the now-senior said, “this is what I want to do with the rest of my life.”

For four years, Beth has starred in show after show at the Baltimore school and some of its co-productions with neighboring The Cardinal Gibbons School.

She followed her starring turn in “The Wizard of Oz” with roles in “Annie,” “Joseph and the Amazing Technicolor Dreamcoat,” “Alice in Wonderland” and “Cheaper by the Dozen.”

“My parents,” Beth said, “always told me that I needed to sing like other people need to breathe.”

Beth has proven them right and plans to major in musical theater next fall. She has several auditions scheduled at various colleges and has already been accepted at The Catholic University of America in Washington, D.C.

The Maryland Distinguished Scholar is in the choir and on the swim team in addition to her many show performances. She is also senior class president.

“I don’t know how to be boring,” Beth admitted. “I like to be involved in everything.”

English teacher Margaret Kenney, the senior class moderator, first met Beth at the start of this school year. Each fall, Ms. Kenney meets class officers to discuss plans for the year, but found there was little need for a transition team.

“My first impression of Beth was that she was a ‘doer,’ ” Ms. Kenney said. “She already had plans for the year.”

The first order of business for the class president was to organize a touch football game involving the entire school to raise money for juvenile diabetes. Each team entered the Gator Bowl having secured a sponsor.

Beth’s friend Julie Buonato was one of several students who had diabetes. Having witnessed Julie’s and other students’ struggles with the disease and the procedures to address it, Beth wanted to help.

“It was very difficult watching (Julie) go through this,” Beth said.

There is one memory Ms. Kenney can’t shake from that day of football.

“By mid-afternoon on this very cold day in November, she was sweaty and dirty after having played the last game outside,” Ms. Kenney said. “When she came inside the school, she was only interested in making sure that all the participants received hot chocolate and that the fundraiser for our cause was successful. At this moment, she truly glowed with joy and satisfaction. She is really a great kid.”

When Beth was in eighth grade, she was told to choose between two local Catholic high schools. One was Seton Keough. Beth’s mom, Terry Amann, graduated in 1978 from Archbishop Keough High School, a decade before it merged with Seton High School.

“I consider it the best decision I’ve ever made,” Beth said. “It is my safe place.”

Ms. Kenney said the school is better for Beth’s decision.

“She has the ability to reach out to all members of the class to make them feel included in decisions and projects,” Ms. Kenney said. “Her loving personality can touch each senior and involve her in all issues involving the class.”