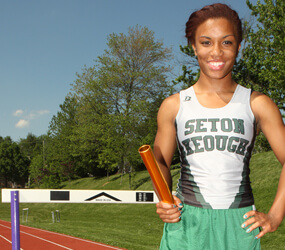 The first time Mark Reedy watched Seton Keough’s track team prepare for a meet, he was stunned by the leadership shown by 17-year-old Jessica Smith.

“She started leading them in prayer,” remembered Reedy, in his first year at Seton Keough after 30 seasons in public schools. “It was intense, man. It absolutely dropped my jaw. They came out of that prayer, and, I’m telling you, you felt the Spirit. They ran out of their minds that day.”

At every meet since, Reedy said, Smith has been the “spiritual catalyst” for the team. The senior has also been a solid runner and a standout student, Reedy said.

“Because it’s an individual sport, you push yourself to get better and better,” said Smith, who has run indoor and outdoor track all of her four years at Seton Keough. “At the same time, there’s a lot of camaraderie and everyone is a team at meets.”

Recognized as an Archdiocese of Baltimore Distinctive Scholar, Smith has maintained a 4.3 grade point average this year. Second in her class, she is president of the student council and a member of the gospel choir. The parishioner of Baltimore’s St. James Episcopal Church is also active in her parish’s liturgical dance program and youth group.

Smith has the distinction of being on two record-breaking teams. In her sophomore year, she was part of a team that set a school record at the Penn Relays by running 51.48 seconds in the 4X100. This year, she and her teammates smashed that record by running 50.32 at this year’s event.

“She led the relay,” Reedy said. “Two lanes over was one of the best teams in the world, from Jamaica. She was calm and cool and everyone kind of fed off of that and they didn’t get tense.”

“I’m not sure how we did it,” she said. “I guess it was the adrenaline. We also did a lot of practice on handoffs.”

Smith will attend George Mason (Va.) University in the fall, where she hopes to continue running.