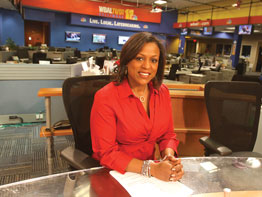 Although WBAL-TV’s on-air talent Lisa Robinson graduated 26 years ago from The Archbishop Keough High School, Baltimore, she still keeps her yearbook in her locker at work.

“I always run into people and want to look them up,” said the member of the class of 1982 who is out and about Maryland as an I-team news reporter and weekend anchor on Channel 11.

Paging through an accompanying high school scrapbook in a lighted makeup room at the station on Television Hill, Ms. Robinson said, “I loved high school.” The younger Lisa grew up with two brothers in Northwest Baltimore, and attended Our Lady of Perpetual Help School, Ellicott City.

Since graduation, she has stayed almost as active with Keough (now Seton Keough) as she was as a student, attending reunions, event planning, emceeing their mother/daughter fashion show and serving the board for three years.

In school, she was a student council and honor society member, joined the cultural awareness club and played saxophone in the band. She loved writing and studied journalism.

The camaraderie in the all-girls school was strong according to Ms. Robinson; students supported each other.

“Growing up as a group of women … this helps to shape you,” she said. She and about a dozen girlfriends have continued their friendship since graduating from the largest class in the school’s history – with 280 members.

Recalling those faculty members who had influenced her in high school, she named English teachers John Cusson and Marge Kenny who she said each recognized her talent and helped to shape it. Mrs. Kenny is still on the faculty.

The then-dean of students, Sister Mary Earle Doohan, a School Sister of Notre Dame, holds “a special place in my heart,” said Ms. Robinson, a mother of two, whose husband is a journalist. “She was very encouraging.” The nun worked at Keough and Seton Keough for 35 years and retired in 2006.

“The basic things we learned as kids were reinforced in school,” she said, “things you’ll never forget. In a place of spirituality, you learn the importance of Christ in your life and can lean on him when you have a crisis.”

Before her 14-year tenure at WBAL – where “there are a lot of Catholics!” she notices, she was on-air in Kentucky and Massachusetts television markets, yet had always wanted to return to Baltimore.

“Who wouldn’t want to work in their hometown?’ she asked, pointing out how rare it is to do so in broadcasting. “I’ve been fortunate.”

As an investigative reporter, she covers an array of stories, requiring her alarm to ring on some mornings at 3 a.m.

A nun she once interviewed knew she had attended Catholic school, she said, by Ms. Robinson’s polite responses of “Yes, sister” and “No, sister.”

Some habits are just ingrained in a good Catholic girl.