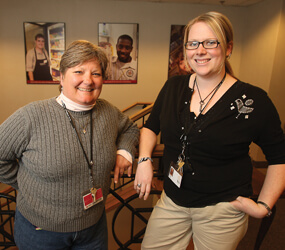 St. Joseph, Cockeysville, parishioner Allis Kensing wanted to be a nurse for as long as she can remember.

The wife and mother of two attended Russell Sage College in Troy, N.Y., where she majored in the subject. But then a funny thing happened. She discovered she wasn’t happy working as a nurse.

“It came to a point in my life where I needed to figure out what I wanted to do,” said Ms. Kensing. “What I was most happy with is spending time with individuals who have challenges and need help and support – and they happen to be people with disabilities.”

Ms. Kensing, who has a sister with Down syndrome, is not alone in navigating a new career path – or in choosing to work with individuals who have developmental disabilities.

Suzanne Billman, who has a brother with developmental disabilities, had been teaching students with special needs for 17 years when she realized she needed a career change. So the Immaculate Conception, Towson, parishioner decided to seek employment at The Arc of Baltimore. Maren Rohde saw a flier her brother had brought home from The Arc, advertising for a career fair. She currently serves as a program manager for the organization.

All of the women have siblings with developmental disabilities, and all have found fulfillment in working with individuals at The Arc.

“There was quite a big pay difference, but what was important to me was that I liked what I was doing, and I felt I could make a difference somehow, someway,” said Ms. Kensing, who works as director of supported employment.

She said individuals supported by The Arc find employment in everything from fast food to law offices.

“It sounds cliché,” said Ms. Billman, who works as an employment support associate, “but I support adults with disabilities to live, work and play in their communities.”

She said she helps them find and maintain employment and resolve any potential issues they may have on the job.

Ms. Rohde, whose brother is supported by The Arc, is responsible for the outcomes and goals of people in residences. “I monitor their progress,” she said.

She said each person identifies a goal, for example, they might want to learn to drive, and she helps them work to achieve that outcome.

“We help people to achieve their dreams, I guess would be the way to say it,” Ms. Rohde said.

The employees do acknowledge they often have to correct people’s misconceptions about individuals with developmental disabilities.

“They might be limited in some ways, but they’re still people,” said Ms. Kensing. “Many times people underestimate what individuals with developmental disabilities are capable of doing and how smart they are.”

Ms. Billman explained how hurtful and offensive name calling can be and said a person should not be defined by his or her disability.

Despite any challenges, the joys of the job are many.

“You get to be instrumental in making somebody else’s life better quality by recognizing that even though they have a disability, they also have something to contribute to the community,” Ms. Billman said. “They pay taxes like everybody else, shop locally like others, go out to work. They are people just trying to live their lives as best they can, but they need the extra support – a guiding hand.

“It’s gratifying to see an individual who has spent the majority of his life in a vocational center agree to take the risk of going out and exploring the possibility of getting a job,” Ms. Billman said.

“A lot of people have a 9-to-5 job, and when people come here, they have to understand that this isn’t just a job – these are people,” Ms. Rohde said. “You become a part of their life, and in turn, they become a part of yours.”

She said she recently had a new person come onto her team who was from the now-closed Rosewood Institution. Ms. Rohde said seeing the woman learn new words and take an interest in jewelry makes her job worthwhile.

“You’re helping people identify who they are,” she said. That’s why you come here to work, because you’re changing someone’s life and you’re changing it for the better.”