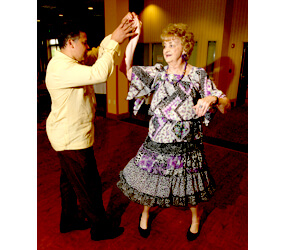 Minutes after she entered the world 81 years ago, Darlene Carter was given her last rites.

Doctors said all life had left the infant. A nurse pled with the doctor that the child who was labeled “Baby Button” on her birth certificate was still alive.

Darlene’s mother, Helen Kathleen Button, lost five children prior to Darlene. As all hope was about to fade, the medical professionals were able to save the baby.

The sixth child was not to be denied.

Carter has won “hundreds” of dancing awards, the most recent coming in May in Sarasota, Fla., during a national competition. Carter and longtime dancing partner James Helmich took home the top prize for “Best of All Dances” and “Argentine Tango.”

“You have to know each other’s body and not be intimidated,” Carter said. “He, as a male partner, is supposed to show off his female partner as much as possible. I like to give it back to him for trying to put up with me.”

Carter, a parishioner of St. Rita in Dundalk, started dancing at the age of 3.

Carter’s husband, John, died in the 1990s after a long battle with Parkinson’s disease. The couple moved to Florida as John sought treatment.

Carter’s father, Francis Button, worked at Bethlehem Steel with John. Carter’s father invited John in after he received a ride home from the young man.

Waiting inside was 15-year-old Darlene, a budding ballroom dancer. The two struck up an innocent conversation about gum and began talking more and more.

Three years later, John, a World War II veteran, looked at his love and said, “You know I’m getting very serious about our situation.”

“You are?” Darlene replied.

John looked at her and said: “I am in love with you, would you be my wife?”

Francis Button begged his daughter to hold off and offered to buy a red convertible car.

Darlene, a Catholic High School of Baltimore graduate, responded: “That won’t take the place of the love that’s in my heart.”

After they were married 1946 at St. Rita’s rectory, the couple formed an agreement: if one went somewhere, the other followed. John traveled to Darlene’s dance competitions for decades and waited each time with a flower bouquet.

He wasn’t even a dancer.

“I had to teach him the slow dancing,” Carter said. “He would do that, but that was about it, but he was a great supporter of me.”

The couple had two children, Kathleen and Cynthia.

John’s struggle with Parkinson’s took a toll, but he wanted her to continue dancing.

“He was a very giving man,” she said. “He said, ‘I’ve seen the world with my service, but you haven’t. Go travel a bit. I don’t want to bring you down.’ I said, ‘That’s between you and your God, but between me and my God, I’ll never, ever leave you.’ ”

She was at John’s bedside in his final hours. His hands turned upward and a smile crept across his face. Finally, he wasn’t any pain.

Darlene’s solace came, as it always has, in dancing.

“People don’t know me when I’m on the floor,” Darlene said. “I’m totally different. My personality changes and I don’t have an ache or a pain. I don’t have any worries. Sometimes, I feel like I’m in somebody else’s body.”

Carter’s competition is often less than half her age and her partner Helmich is in his 40s. During a video of her performances, catcalls can be heard as she sashays across the floor and she can be seen giving flirting glances to judges.

Dancing has evolved over the years.

“The gowns have changed,” Carter said. “They’ve become more risqué. At this age, you can’t do that.”

“I watch and critique them when I’m here by myself,” Carter said. “If I have anybody else with me, I keep my mouth shut. When I’m by myself, I’m yelling ‘You’re not supposed to do that!’ ”

Carter recently entertained giving up dancing. In recent years, she had sold some of her extravagant gowns. All, it took, though, was some coaxing from Helmich to get back on the floor.

Dancing is a part of her, so much so that she often twirls around her apartment with a large stuffed bunny.

“I just love it,” Carter said of dancing. .”It’s the greatest high.”